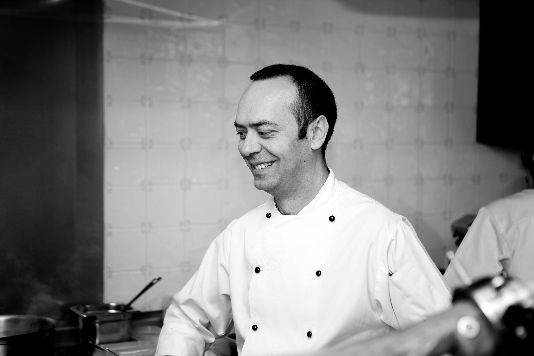 Our favourite Spanish chef talks quality produce, new projects and why he nearly ended up as a dental technician.

Extremadura - the area of Western Spain where you grew up - has a great food culture and exceptional produce. Were you aware of your food heritage as a child?

I was. It was normal to go into the vegetable garden and pick tomatoes, mushrooms, snails. I grew up on a farm and I remember that my dad had cows for milk and I wasn’t allowed to drink it straight away because you have to boil the milk and kill all the germs. So I went to another farm just so I could try it and the difference was amazing.

When I meet a child and they don’t know where an egg comes, it is shocking. I would see a pig being killed for food and it was normal because I grew up with it. You knew that that pig might be your pet now but it would soon be your food.

You originally trained as a dental technician at university. What prompted the sudden change in career?

When I was tiny, I loved the smells of my grandmother cooking the partridge for Christmas, the smell of burning off the feathers – I was always interested. It was always inside of me.

Then when I finished my studies, I was waiting to start a job in Seville. The job was mine but I had to wait three or four months so in the meantime, I started a cookery class. I knew I wouldn’t be able to finish it but just thought - I’m going to do it!

Three or four months after that, I got a job with a chef and I completely forgot about the other job – I didn’t care about teeth anymore! I started cooking just one day a week while studying and then I forgot the studying and concentrated on cooking.

If I had started the other job straight away I would still be in Seville.

What were your early experiences as a chef like? Is it a tough job?

My first head chef was horrible to me – always saying: Don’t do this, Don’t do that. One day she told me, everything that you are learning from me will be the most important thing in your career – to be clean and tidy, responsible and on time. You have to learn these things to be a chef. I have huge respect for her now, for teaching me those things, the basis of being a chef.

It’s hard but you love it. It’s long hours, it’s hot, it’s stressful. But if you don’t love it, you don’t become a chef.

What was the Spanish food scene like when you first moved to the UK?

There wasn’t much around. Forty years ago you couldn’t get good Spanish food here. But Spanish food deserves to be well known.

One of the problems was that so many people were going to Spain and just eating tourist food.

Now people come back to the UK now and say Spain is amazing. Even the big supermarkets are launching Spanish food ranges this year. Spain is culturally cool now.

The Spanish food retailer and restaurant Brindisa has done a lot to change the perception of Spanish food in the UK. You were the head chef there.Was that an interesting project to be involved in?

Absolutely. It was a privilege. They were the first. They were king. But now there are so many different suppliers, different companies, which is great. Now I can get all sorts of ingredients you couldn’t find before – amazing cheese, ham, anything you need.

Your own restaurant, José, has had fantastic reviews from critics. You must be very happy with such quick success.

It’s unbelievable. I never expected it. I was really worried to start a tapas bar – it’s small, it’s not very comfortable…. I’m not selling my bar very well am I? In Spain this is like any local tapas bar but here it is unusual. People are used to sitting down at a table to eat in the UK, even in tapas restaurants, but here you sit on stools.

We are doing 1,500 customers a week at the moment but the worry was huge for me. I left Brindisa, I sold my part of the company and put all my money into this. My family thought I was loco!

But people love it. I’m the happiest person in the world.

What is your food philosophy?

It’s also about educating people. The great thing about London is people are very open and willing to learn. A lot of young people are coming here, especially to try the different types of sherry. It’s very different to what they have tried before. You go to a lot of places and they serve it warm, it’s been open for months. If you are young and you try that sherry you won’t want to drink sherry again. You come here and you order a Manzanilla or a Palo Cortado and you will say: “Mamma mia! What is this?”

Also worthy of your attention

Is it your fault Britain is obese?

Have we gone tipping mad?

Stop starving us and give us proper portions!