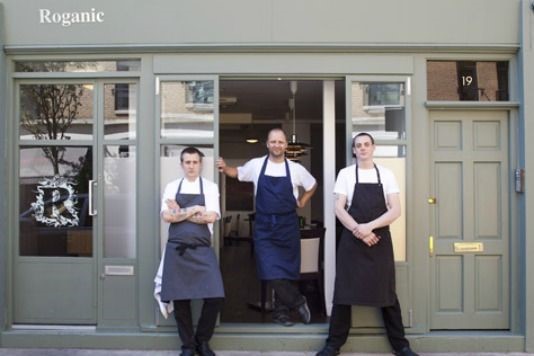 There's much more to this pop up than a punning name

Much has been made about the name Roganic. Indeed, a quick Google shows that there have now been 517 reviews of Simon Rogan’s so-called ‘pop-up’ that have begun with a dissection of the moniker. I don’t see any reason to do any different, so I shall weigh in with my own thoughts.

Which are precisely: who gives a toss? As Shakespeare once wrote “what’s in a name?” Well, I’ll tell you – a bloody good excuse for a critic to fill a couple of paragraphs before having to actually talk about food.But there are far worse names than Roganic. Fishcoteque? Thaitanic? Crabby Dick’s? I mean, come on. Vagina Tandoori? You go to a restaurant to eat, not to analyse the name. The Beatles is possibly the worst band name ever, but no one thinks about that anymore because they were awesome.

And so, too, is Roganic. The chef Ben Spalding and I had already fallen out and made up again (I think) on Twitter after I’d suggested it was a rather cynical PR move to call a restaurant that is there for two years a ‘pop-up’, and reports generally suggested the 24-year-old was quite a punchy character. But his CV reads like a Michelin groupie’s bucket list, and the pedigree shows. The dude can cook.

As gin and tonics are sipped and menus are mulled over, a handsome canapé of cucumber mousse, linseed and aioli on a squid ink biscuit appears. It’s lovely – fresh, brittle, clean.

Unable to face the full 10-course menu, we stick with just the 6 courses, which nevertheless come with a few surprises. The first is a stunner. Pom pom mushroom, mushroom puree, chicory, mushroom soil, caraway butter, radish (unnecessary says Rosie)…it’s a great whack of savouriness that is all at once hefty and light.

In fact it’s something Spalding manages with each dish – big flavours, as the Masterchef boys like to say, but with an extraordinary lightness of touch. Millet pudding is essentially a grain risotto – think pearl barley – with Devon blue cheese, pear, and a pink blob of bone marrow. It’s home cooking, really, but like the best Monday night supper you’ve ever eaten.

Cured Dorset char comes under a glass cloche with a great waft of the most beautifully perfumed smoke. The dish has a strange aftertaste of men’s urinal, which sounds crueler than it’s meant to. It wasn’t bad per se, but something in there tasted like urinal cake. The crab apple maybe. Or perhaps the chef was getting his own back for my cynical tweets.

King Richard arrives. He is a leek. He is a leek baked in clay with truffle and rosemary and shallot, and he is just peachy. Sweet, soft, earthy, and not a hint of string – worth a crusade to Roganic alone.

Get your skates on

Skate belly just about wins the prize for dish of the evening. A dainty wee rectangle of beautifully cooked, crisp skate, a plump scallop, piquey beetroot, caramelized cauliflower puree…god but it’s good. We are getting full but mop up every last bit with bread. Oh, and extra marks for leaving the (excellent) bread on the table throughout the meal.

Cumbrian rose veal is nice but dull, like Alan Shearer. You couldn’t fault the cooking, but it’s a little placid after such inventiveness.

Pudding is a bit crap. Dried bilberry crisp covers iced yoghurty something and mint, and tastes like eating a fruit corner after brushing your teeth. Then comes perhaps the most bizarrely wonderful thing I’ve ever eaten. It’s a spiced cake with sea buckthorn puree, almonds and smoked clotted cream ice cream. And I mean properly smoked. It hovers in the limbo between disgusting and delicious in the same way offal-lovers feel tripe does. Clever sausage.

If that’s a signature dish then the Douglas fir milkshake and a homemade jammy dodger is a winning postscript. It’s like I’m five and it’s bedtime. A magical send-off.

Despite my apathy towards prolix menus, and my slight sniffiness about, ahem, rambunctious chefs, I couldn’t help but love Roganic. It’s really jolly good, and if this is the kind of eating you enjoy then I urge you to go. The service is utterly charming (though for some – not me – it might be overly chatty), the grog gluggable, and the food is absolutely worth the hype. The name’s not bad, either.

Pop-up restaurants are over-hyped and over-priced!