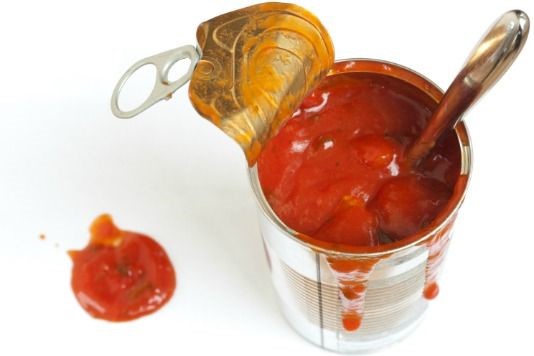 The dreary days of autumn are upon us. Now, instead of a crisp salad, a hot bowl of soup just started looking a whole lot more attractive. But who has the time to make their own fresh all the time? Whilst the domestic whizzes smile smugly, the rest of us are left tramping off to the shops for our serving.

This is where it gets tricky. The increasingly popular fresh soups contain largely natural ingredients. In fact all the ones I looked at, except Heston’s lobster bisque in Waitrose (tut, tut), remained happily simple and additive free. (Although bizarrely it turns out that carrot and coriander soup is often coloured with orange juice)

In the canned goods aisle

Not so, the case for canned and instant soups. These quick winter warmers can be full of unwelcome added extras, like stabilisers, colourings and artificial flavourings, plus other substances that you really don’t need to be eating.  In fact, in amongst the ingredients of Heinz canned soups – of which Cream of Tomato soup is a staple in my cupboard – you’ll find not only a dash of polyphosphates and sodium phosphates, but some beta-carotene colorant, modified cornflour for thickener and two teaspoons of sugar per serving. Yum.

It’s the same for Campell’s. In its soups you get modified maize starch too, and some whey powder, soy and milk proteins. I also thought Campbell’s soup was on the salty side, with as much as 10% of your recommended intake in one portion. That was until I looked at some own brand soup from Tesco, which in one serving had 20% of your daily intake. Other ingredients included ascorbic acid, carotenes for colouring and dried chicken. It’s a similar case for the Baxters range, which has the double whammy of being both high in salt and sugar.

As the number of ingredients rises, it seems the nutritional value gets lower and lower. By the time you get to packet soups, you start to wonder what’s the point of eating them at all? In a Batchelors Cup of Soup you’re getting MSG, Disodium 5, Tibonucleotides, Disodium Guanylate, maltodrexin, along with as much as 21% of your daily salt intake. As well as a large serving of sodium, Knorr’s chicken noodle soup contains the antioxidants Alpha-Tocopherol and Ascorbyl Palmitate, both additive e numbers. Yes, packet soups are low-ish in fat, but once you dehydrate veg and meat it tends to be low on flavour too, hence the additional chemical enhancers.

Evidently, people buy these for price and convenience. Cans of soup and instant packets are cheaper than chips. They also sit comfortably in your cupboard until you get around to eating them. There are, however, long-life soups that come without the unwanted extras. Pouch soups (found in the cans aisle) still last longer than fresh, but don’t contain any of the chemicals that are in canned soups. Amy’s Natural Soups are canned, but free from nasty extras, instant Miso soup from Clearspring too. But admittedly these aren’t as cheap as the regular stuff.

Making your own, though, can be very economical, and so, reluctant as I am to eat things I can’t pronounce (Asian food excepted), perhaps a few hours whipping up a batch of soup would be time well spent. Pub chef of the year Simon Goodman makes this sweet potato and parsnip soup look dead easy. Cooking time is minimal at 30 mins, plus without the truffle oil it won’t cost you much. Or this pea and ham soup is also easy, but a great meal. And if you’re feeling more adventurous, you could take on Valentine Warner’s quick fish soup, or even Brian Turner’s chunky tomato soup.

The key to all soup is a good stock, which you can make from your leftover meat carcass or bones and vegetables, to wring even more value out of your weekly shop.  Soups also use cheap cuts of meat, like oxtail or beef brisket, which are packed with flavour, you just need to put the time in slow cooking them to tease it out.

So now that the days are shortening and the weather turning, instead of relying on the supermarket for a warming soup, have a go yourself. Then once you’ve got the hang of it you can count yourself amongst the other domestic whizzes. Cue smug smiles.

Also worth a look

Morrison’s gives Waitrose a run for its money

A two week old sandwich? Thanks, but no thanks