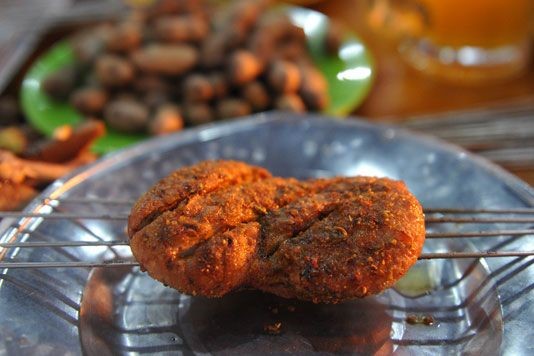 A cookbook about testicles? Andrew Webb girds his loins and winces through `Testicles: Balls in Cooking and Culture'

Thanks to the efforts of a new generation of chefs, all schooled in the ways of the wonderful Fergus Henderson, we’ve begun to look anew at the lesser well-known parts of animals in recent years.

When the current recession was known simply as the credit crunch you couldn’t move for ‘forgotten cuts’ articles and features. So now that you can find ox tail, pigs’ cheeks and offal on most meat counters, ‘nose to tail eating’ is what it’s all about. Despite this however, you’d be hard-pressed to find any testicles in most butcher’s shops, apart from the owner’s.

The difficulties of French translation

There have been other testicle cookbooks before, but none look quite so broadly at the subject as this one. The book is a translation from a French book published in 2005 written by Blandine Vié. Tom Jaine, owner and publisher at Prospect Books, specialises in reprinting historical, rare and unusual books such as this one. “Little publishing houses like mine can’t do lots of translations as you have to put a lot of money upfront. I thought ‘I’ll just do it myself,' but three pages in I thought, ‘f**k this!” So Tom called on the services of Giles MacDonogh, whose observations and footnotes add much to the enjoyment of the book.

What the book shows, not pictorially thankfully, is that the consumption of animal’s testicles was once much more common in the past and indeed it has a long and rich history across many cultures. Being a French translation there’s a strong emphasis on French and European culinary uses of testicles. They were much consumed by French kings for their supposed aphrodisiacal qualities.

The Marquis du Sade’s little salad, for example, features not only lamb’s testicles, but also artichokes, rocket, truffles and nasturtium flowers, all of which he believed enhanced a man’s desire. In the nineteenth century the butchers at the famous Parisian market Les Halles often consumed testicles along with other offal as their mid-morning snack.

Other recipes in the book include ‘bollocks in the nest’ which sees a fricassee of testicles served in a small hollowed-out brioche bun. There are also a few examples of mock testicle dishes, one being ‘eggs in the manner of donkey bollocks’, which sees two large poached eggs served in a meaty red wine sauce.

The text goes on to inform us that the humble donkey possesses the largest penis to body mass ratio of any animal. Which no doubt accounts for the expression ‘hung like a donkey’.

The rest of the recipes look to North America, North Africa and the Middle East, where lamb and bull testicles are still consumed. Indeed heading to your nearest ethnic butcher is probably your best bet for getting your hands on some. Either that or cosy up to a butcher who has a direct relationship with a farmer or slaughter house. Failing that, you can order them online. If you know of anywhere else to get them, let us know in the comments below.

The final third of the book contains the biggest collection of terms for the male equipment outside the Viz Profanisarus. There’s also literary and historical examples peppered throughout. Today offal is rarely seen in the shops. This despite being cheap, and in the case of things like liver, incredibly good for us. As the book states. ‘At the end of the Twentieth century nearly all offal was on the wane…testicles, calves’ heads, trotters, ox heart, spleen, caul, liver and lights , etc. Now only the real offal-lovers continue to eat them.’

So are you a fearless gastronaut unafraid of putting anything in your mouth? Or does the whole idea make you feel squeamish? Let us know in the comments below.

Testicles not quite your thing?

It's time for a retro revival

Treat of the Month - Foie Gras