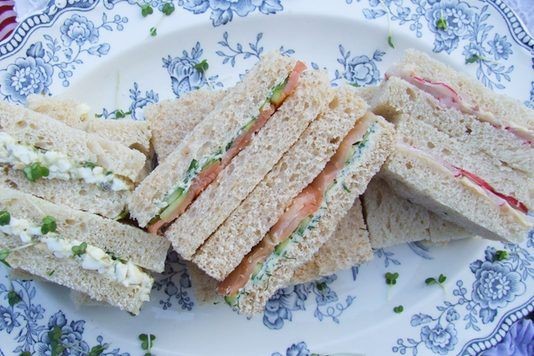 Sandwiches are one of the most popular lunches in the country, with 11 billion eaten a year. Yet increasingly we seem to favour foreign fillings, surely it's time to celebrate the best of British?

There are many reasons to love the sandwich: they're fast and easy to assemble, endlessly variable and incredibly convenient, which is, after all, why they were invented in the first place. The story goes that the sandwich was popularised by the 18th century aristocrat John Montagu, a.k.a the Fourth Earl of Sandwich. My favourite (probably glamourised) version of the tale says that he came up with the idea while gambling; so fiercely dedicated to his cards was he that he called upon servants to put meat between two slices of bread, saving him the hassle of having to stop playing and eat a meal with knife and fork.

Montagu made the meal fashionable among the social elite of Britain and its popularity boomed across the social classes; in Victorian times sandwiches were available on every street corner where labourers picked up fried egg baps and drunkards mopped up the evening's booze with a slice of boiled ham between two bread sponges.

A British sandwich that has retained a sophisticated image is the afternoon tea or 'finger sandwich'. The tradition is a 17th century one but became very popular in Victorian Britain with the increase of tea consumption; at this time it was usual for people to eat just two main meals (breakfast and dinner), so afternoon tea became popular as a way of staving off hunger during the gap. Tea sandwiches are always dainty, the fillings parsimonious and the crusts, removed. The rules state that each should be capable of being eaten in no more than two bites.

The bread and butter

The bread is traditionally a white, 'Pullman Loaf', taking its name from Pullman trains where bread  was baked in long, flat-sided tins creating a square shape that’s perfect for sandwich-making. The classic filling is cucumber, evoking visions of hazy summer days and cricket whites; thin slices of peeled cucumber, an amber slick of butter; a careful dusting of white pepper. Nowadays fillings vary, with afternoon tea destinations such as The Ritz serving luxurious smoked salmon, egg mayonnaise and ham.