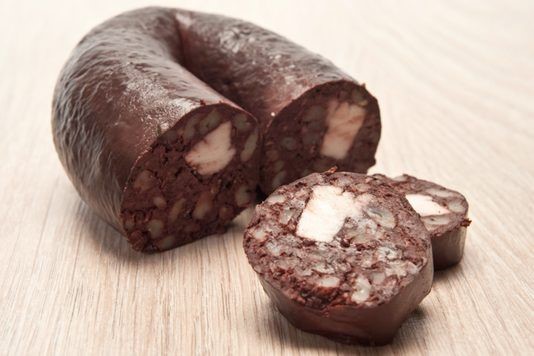 Once made all over the country, in England at least black puddings are now most closely associated with Bury in Lancashire, Chadwick’s market stall there a local institution. They were originally made when nothing was squandered, so the quickly-spoiled blood of a pig killed for winter salting around this time wouldn’t be wasted. Now like pig’s cheeks they’ve become somewhat chefy.

The ingredients aren’t promising: blood (traditionally pig’s, often ox now), fat, cereal, rusk, onions and flavourings. Secret recipes are a cliché, but though we know celery seed and pennyroyal are characteristic of the Bury pud every supplier keeps precise details hidden: even after Tony Sinacola married Mary Chadwick she was loath to divulge her family’s: ‘Only when she was in hospital giving birth and I had to make them all on my own did she tell me!’ he says.

Do the French do it better? Their boudin noir foregoes cereal, making it smoother but arguably less interesting. Chris Johnson of the wonderful Ramsons restaurant near Bury rather disloyally says: ‘The best black pudding I ever ate was in South-West France, made perfectly fresh just after they had a pig-sticking, served with other pork meats for a wonderful contrast of textures.’ Normandy even has boudin brotherhoods - the Confrérie du Goute Boudin in Mortagne-au-Perche hosts an annual competition where you’ll even find blood pudding chocolates.

Andy Holt of The Real Lancashire Black Pudding Company and one of Rick Stein’s food heroes just appeared on Ade in Britain making his puddings: ‘There’s more to it nowadays than the traditional pudding – chefs are using it creatively, our veggie version has gone down a storm, and we’ve got a chili pud that’s great with apples fried in butter,’ he tells us. Debbie Pierce of The Bury Black Pudding Company says: ‘It’s not seen as just a breakfast item anymore because of all the weird and wonderful things chefs are doing with it. Sales have grown over the last five years and our product sells throughout England now.’

Do you have a favourite brand or way of eating black pudding? Or can you not stand the stuff, let us know.

Curious about black pudding and other peasanty bits?

What's the best bit of a pig?

Something else that needs courage to eat

Elsewhere on the web

Some chefy recipes for black pudding