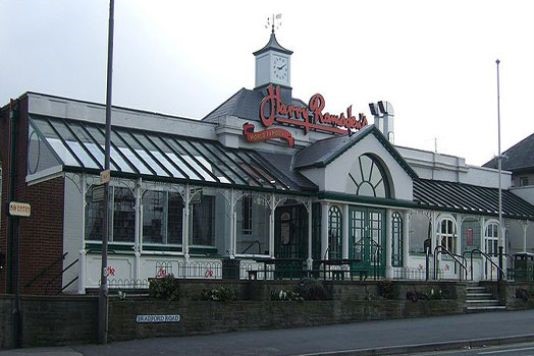 Following the announcement that the original branch of Harry Ramsden's is to close, we ask 'has this chain had its chips?'

We were saddened to learn this week that Harry Ramsden’s restaurant at White Cross in Guiseley, Leeds is to be closed. This was, after all, where the international fish and chip brand began. But the company says the original site is no longer profitable.

The small, striped wooden hut where Harry Ramsden started frying on 20 December 1928 still stands on the site. There are reports that the hut may be saved.

When the takeaway hut opened, there was a tram stop next door, which greatly helped passing trade.

Three years later, a restaurant, which Ramsden described as a “palace”, with décor apparently based on the Ritz, opened next door. It seats 250 people.

Ramsden’s nephew Harry Corbett (of Sooty fame) gave piano recitals in the restaurant. There were also occasional performances of works by Strauss by full symphony orchestras.

The restaurant broke the Guinness World Record for most portions served in a day when it cooked up 10,000 portions in 1952 to mark its 21st anniversary. The fact that the meals were served at 1931 prices certainly helped. And Guiseley broke the record again in 1988, dishing up 10,182 portions.

Following the news, readers of local Yorkshire newspaper websites have been reminiscing about the restaurant. Many have pointed to high prices and a decline in the food in recent years as the key reasons for its closure.
And local MP Stuart Andrew joined in, saying: "When you are going to Harry Ramsden’s fish and chip shop your mind is already expecting the best – but it is almost like going to Harrods and waking up disappointed.”

Ironically, just a few weeks before the closure was announced, there was controversy locally when the restaurant was omitted from a guide to Yorkshire chippies. Welcome to Yorkshire, compilers of the guide, said it was because Harry Ramsden’s was now a national brand and it wanted to promote local outlets.

There are now 36 Harry Ramsden’s restaurants and takeaways in the UK and Ireland. The current owners say they still have plans to expand the brand around the world.

Do you have special memories of Harry Ramsden's, in Guiseley or anywhere else? Or is the beginning of the end for an iconic British food brand? Share your thoughts in the comments box below.

Also worth your attention:
Fish and chip restaurant award finalists announced
The top six fish and chip shops in the UK
Is dripping better than olive oil in the kitchen?
Can fast food ever be healthy?