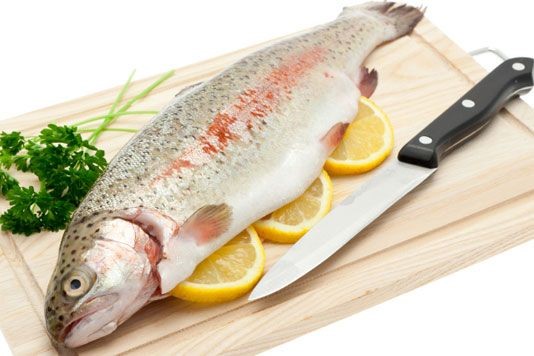 The trout farm I run is one of the oldest in the country started in 1948, by a Danish entrepreneur whose family had been trout farmers for generations. The same family still own the farm and my father managed it for 44 years before I took over in 2009. Rainbow Trout is often seen as the poorer cousin to Salmon or “the other pink fish”. It is a great source of omega 3 and a very versatile and sustainable fish. We start early because in two hours time I’ll have a lorry coming in ready to take the day’s harvest and distribute it to the supermarket depots. We work on a strict routine that the fish are put on ice into 4kg boxes and away on a refrigerated wagon in the quickest time possible.

Two of my staff will go into the pond to harvest the fish into our transport tanks, whilst one of the others prepares the ice and the boxes ready for packing. Each box is weighed, iced and labelled with around 10 fish per box, we usually send out anything up to 500 boxes per day.

The wagon has pulled away from the yard on its way to Grimsby where it meets up with other wagons bringing various fish from around the country on their way to the shelves. For us it’s time to feed the fish. We are quite lucky that we have a railway system built around the farm so one man can feed 90% of the farm, this is done by blowing the food into the ponds.

In the winter months we will have eggs on the farm. Fish only spawn on the winter and take between 15-20 months to reach market size, so we have a lot of eggs that we need to look after as we only get one shot. In the first 20 days of the eggs life they can’t be touched or moved in any way, as they are so delicate, it’s only when they reach the eyed stage that they can be kept clean. This basically means that we can actually see the fish starting to form inside the egg, a couple more weeks and they start to hatch out. At any one time I can be looking after around 6 million eggs, all of which have come form broodstock on our farm.

As the fish need to grow over the space of a year we have to make sure that they don’t all get too big too quickly, we also have to keep each pond in size order so that the bigger ones don’t eat the smaller ones. This is called grading. We do this regularly as we have to make sure the fish only hit the shelves when they are ready, and they don’t get too big that they won’t fit in the box.

Unlike most farming though we don’t have immediate access to vets that specialize in fish, so a vast majority of diagnosis and treatment has to take place in house, this can involve dissection, microscopy and bacteriology, (growing bugs in petri dishes). When you have an entire years income on the site at once you have to make sure that any disease is dealt with quickly.

Time for the lads to go home, for me I’m still on call, although I can put my feet up I have to keep an eye on the river level so that it doesn’t get too high or low, and listen out for alarms in case a pump or aerator stops working, at least until 8:00pm when I have a night watchman arrive who works until 4:00am and I can finally get back to my pillow.

Rainbow trout should surely be seen as an alternative to sea fish such as cod or Haddock, there is no by-catch and is much cheaper. If you’ve never tried trout or not used it for a while I urge you to give it a go. My tip would be to buy a gilled and gutted trout, make 3 cuts in the side and rub in some herby butter, then stuff the cavity with dill, thyme, sliced fennel and lemon and cook in a sealed foil bag with a dash of dry white wine for about 12-15 minutes.

Then simply peel back the skin and serve using the cooking juices with a bit of cream as a tasty sauce.

More 'day in the life' stories

A day in the life of a turkey farmer’s daughter