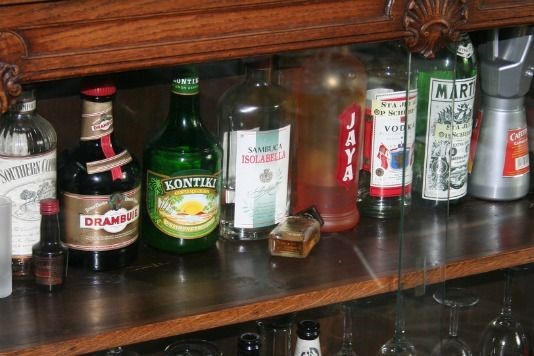 The party’s over. Bottles with sad remnants of inexorably oxidising fortified wine or a few drops of spirit are hogging space. So what's it to be? Sticky cocktails, or a culinary flourish? We say pass the pans please.

Vermouth’s herby character cries out for culinary use: a dash of a dry white version improves a fish soup hugely; Jane Grigson used it to make a bread-crumb, butter and garlic paste to keep fish moist during baking; and sweeter red vermouths round out meaty stews nicely. Try deglazing the sticky bits from a frying pan with a glassful for instant jus.

Another natural pairing with seafood – use judiciously in fish and seafood stews where it has time to cook out. Conveniently for those post-Christmas bottle ends sherry complements certain January root vegetables, for example Nigel Slater harnesses sherry’s velvet unctuousness in a dish of turnips slow-braised in butter and sherry, the technique equally good with chunks of Uriah-Heep-humble swede.

Auntie Edna only had one-glass-dear of Harvey’s Bristol Cream. What to do with the rest? Amontillado and Oloroso have an affinity with chicken livers, either in a cheap and delicious pâté, or equally economical sauce to go over tagliatelle, but again be sparing with the liquid.

Sticky sherries, however, really come into their own in zabaglione, electric-whisked egg yolks and sugar in a bain-marie, the liquor introduced gradually with the machine still racing.

A drop of port gives gravy gravitas, supplements stews, makes an instant sauce with any red-fruit jelly and a spoon or two of stock... in fact it’s a kitchen saviour, its alchemical genius seen in Hugh Fearnley-Whittingstall’s roasted red onions with port and bay. As he writes: ‘The rich fragrance that wafts from the oven as it cooks is quite delectable.’ We’ll vouch for that.

Spirits in the kitchen doesn’t necessarily mean flambéing: for example Elizabeth David suggests a few drops of Pernod to enhance fish soups; and pork pâtés benefit from a glass of brandy. But the brief blue flames of burning alcohol – be careful! - work rapid magic on so many foods: basic bananas cooked in butter become luxurious with a glass of Armagnac sacrificed to them. After the fire the flavours remain – essence of spirit plus tasty caramelised loveliness. A personal favourite is large prawns cooked in butter then flambéd in Calvados, double cream added when the flames have died.

Do you have any favourite uses for spiritous remains?