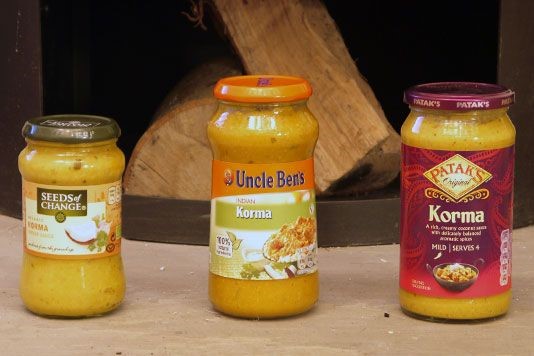 If the bank balance is still biting and you can’t afford a takeaway this Friday night, how about buying a cost-saving ready made curry sauce instead?

While originally famed for its rice, for the past 20 years Uncle Ben has been making Oriental, Indian and Mexican sauces too. The darkest sauce in our taste test, the Uncle Ben korma was packed with tomatoes and onion. In fact, if we’re being honest, it tasted more like a tikka masala but tasty nonetheless.

Best for? Dunking your chips in. It had a sharp edge from some lemon and some gentle spicing.
Lovefood.com tip: Although the cooking instructions on the jar recommends cooking with chicken, we reckon the richness of the sauce would work just as well with lamb. Add sultanas and cardamom to your rice while cooking for extra interest.
How much? A 490g jar of Uncle Ben’s Korma is available for £1.69 from Tesco and £1.76 from Sainsbury’s.

Korma is one of Patak’s most popular curry sauces, and we can see why. Out of the three this was the creamiest sauce by far and packed with true coconut flavour. There’s a savoury oniony backnote and subtle spicing, balanced with the natural sweetness of the coconut and cream.

Best for? Korma purists. This is as about as close to a good takeaway as you’re going to get.
Lovefood.com tip: If you like the creaminess of a korma but miss the heat of some other curries, fry fresh chillies and grated root ginger in oil before adding your meat or vegetables and the sauce. Some fresh coriander would pep it up a notch or two, too.
How much? The 500g jar of Patak’s Korma is available from the big four: Tesco, Sainsbury’s, Waitrose and Asda, all for £1.76.

This tasted truly homemade. Despite looking a little gelatinous when first poured out of the jar, the resulting sauce was creamy and rich. It was aromatic and packed with warming fresh root ginger, giving it a natural heat without the presence of chilli. It tasted fresh, sweet and fragrant, just as a korma should.

Best for? Organic fans. Everything in this jar is organic apart from the water and salt.
Lovefood.com tip: To add extra flavour marinate your chicken or paneer with a korma paste before frying and adding your sauce.
How much? A 350g jar costs £2.29 at Tesco, Sainsbury’s and Waitrose.

Chick Pea and Potato Curry for under £3