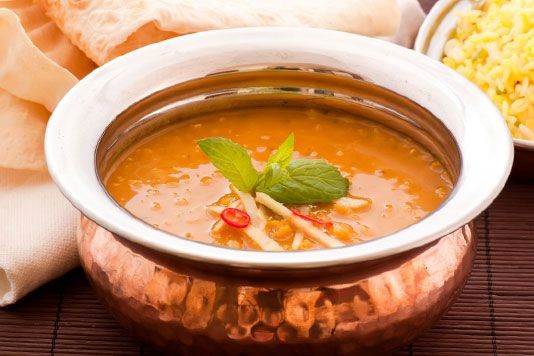 In the second of his three part series on Anglo-Indian cuisine, Humayun Hussain looks at an old favourite, mulligatawny soup

Aside perhaps from a 'yakhni' (a type of clear broth), Indian food culture has never really had a place for soups. Hardly any surprise them to learn that one of the most prominent dishes of the Anglo-Indian repertoire, whilst generally considered for having its roots in Indian cooking, is in fact, Sri Lankan in origin.

The word ‘mulligatawny’ sprouts from the Tamil language and an amalgamation of ‘molegoo’ (pepper) and ‘tunes’ (water). No wonder then that the soup as it became was originally nothing more than ‘pepper-water’, which is said to have been drunk by the poor in Sri Lanka or as some say even had its beginnings in the Tamil community of south India. The ‘water’ has gone though so many variations since – particularly being adapted by rulers of the British colonial Raj as a richly dense soup.

Recipes for the soup appeared in many Victorian publications. The Nabob's cook book from 1870 has a recipe featuring 'fowl'. It also contains a recipe for a 'non-soup' version.

Cassell's Household Guide from 1869 contains a bit more history, particularly in preparing the dish, and you can't help but admire the line 'kill, singe and empty a chicken' in the recipe method.

Even French cookery adapted for English families by Frances Crawford, published in 1853, contains a recipe, though she adds at the end...

‘In the original form,’ says Abdul Yaseen, head chef of London’s modern Indian restaurant Cinnamon Kitchen (www.cinnamon-kitchen.com), ‘mulligatawny soup was quite bland. But as British cuisine has always had a fair range of soup items, once it was given a transformation in India, it not only became a soup which was full of flavour, it partnered eastern and western influences very well.’

Yaseen, who says that he has a particular fondness for Anglo-Indian food as his aunt, who is Christian, used to make it for him when he was growing up in India, offers his Indian style version of mulligatawny soup, which he used to prepare whilst working in India.

Whilst soup with rabbit and bacon may not be to everyone’s taste, there are several ways in which mulligatawny soup can be made - whether it’s with chicken, lamb stock, vegetables, thickened with rice or noodles and even with the addition of nuts. During the early nineteenth century, with the East India Company having already introduced mulligatawny soup to he UK, there was even a ‘mulligatawny paste’ paste available which could be added to meat stock.

‘Mulligatawny soup may be a dated Anglo-Indian dish,’ notes chef Cyrus Todiwala OBE of Cafe Spice Namaste (www.cafespice.co.uk), in London’s East End. ‘But there is no reason why it can’t be rekindled with new types of ingredients and textures, or even be presented as a side dish or dip. It’s so versatile and when I’ve had it on my menu, made of pureed chicken stock, lentils and vegetables, I served it with rice.’

Guide to game: Why don't Indian chefs use game more?

A potted history of kedgeree