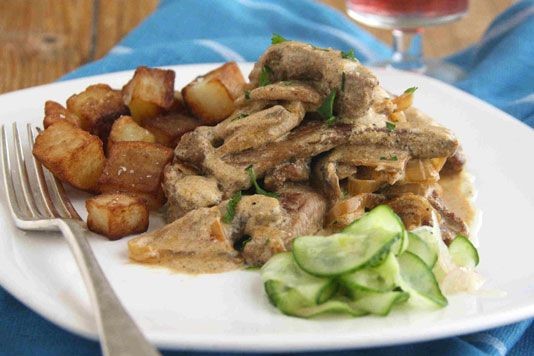 Once a staple of the 1970s dinner party circuit, beef Stroganoff has its origins in the aristocratic kitchens of Imperial Russia but ended up as a flavour for an instant pasta mix. Jassy Davis explores the rise and fall of this classic dish.

When Russian money meets French chefs, the result is always extravagant. In the 19th century, one of these luxurious pairings gave us in beef Stroganoff – a dish of finely sliced beef fillet and mushrooms slicked with sour cream that’s expensive and delicious in equal measure.

Beef Stroganoff is named after the Stroganoff family and there are two particular Stroganoffs who are thought to have been this dish’s muse. Count Pavel Aleksandrovich Stroganoff is the aristocrat most often associated with it. The most popular version of the story is that Pavel entered into a cooking competition with other families on the St Petersburg society circuit. Pavel’s French chef, Charles Brière, took the prize and named the winning recipe after his employer.

An alternative account has Pavel stationed in the bleak depths of Siberia. The beef had frozen solid, but Pavel’s resourceful chef managed to shave thin slices of meat off the carcass and invented beef Stroganoff to make use of the tiny scraps.

A flavour of Russian hospitality

Count Alexander Grigorievich Stroganoff is the dish’s other namesake. The happy version of his story is that Alexander instructed his chefs to always feed anyone who set foot on his land. In need of a quick but impressive meal, his chefs came up with beef Stroganoff.

Alexander lived to be 96 and the less cheering tale is that, as he aged, he lost his teeth and couldn’t chew his meals. His chef came up with a dish of steak sliced into small pieces so the Count could eat without effort.

Whichever Stroganoff had the dish named after them, they were not enjoying not an original meal but a refinement of an earlier recipe. The classic beef Stroganoff recipe, made with mushrooms and sour cream, first appeared in L’Art Culinaire in 1891. However, Elena Molokhovets 1861 cookbook A Gift to Young Housewives includes a recipe for “Govjadina po-strogonovski, s gorchitseju” – Beef Stroganoff with mustard.

The 1861 recipe is plainer than the 1890s version, made with beef, allspice, butter, flour, sour cream and mustard. Over time the dish has been tweaked – first by the Stroganoffs’ chefs, who gussied up the meal to match their employers’ status, and later by chefs looking for ways to make it quicker and cheaper.

By 1912 finely sliced onion and tomato paste had been added. The first English version of the recipe was published in Good Food by Ambrose Heath in 1932, while in America John MacPherson published a recipe for Beef a la Stroganoff in The Mystery Chef’s Own Cook Book in 1934.

MacPherson’s recipe is fairly close to the 1891 meal, although his suggestion of  “½lb or 1 can mushrooms” hints at the direction beef Stroganoff is about to take. In the 1950s and 1960s American recipes married the elegance of the original with the convenience of cans and packets.

Luxury at half the price

Condensed mushroom soup, instant minced onion, canned beef bouillon and ketchup were all added, and thrifty cooks offered alternatives to pricey beef fillet. Slow-cooked stroganoff made with stewing steak in the newly invented crockpots was popular in the 1970s, while many American families sat down to hamburger Stroganoff.

Stroganoff flavoured Hamburger Helper – a box of pasta and sauce that you just add hamburger too – is still popular today. A Beef Stroganoff Cup-a-Soup has also appeared on shelves, and a freeze-dried packet version ensures mountain climbers can enjoy beef Stroganoff wherever they are.

From aristocratic beginnings to mass-market convenience food, beef Stroganoff has come a long way from Imperial Russia. For my version of this dinner party classic, click here.

In the mood for more beef?

My golden rules for perfect steaks

How to make the best burgers