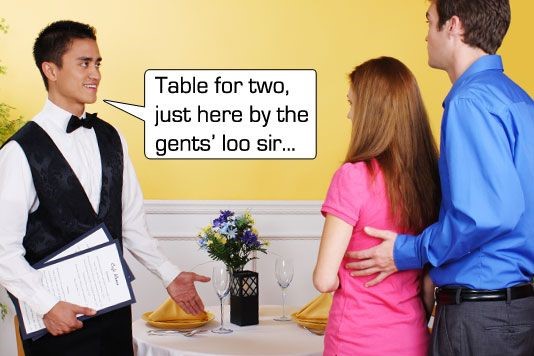 Seemingly always banished to the table by the gents' loo, our man speaks to industry experts on how to get the best table in the house.

A few weeks back a restaurant critic devoted a large portion of her review to an extended whinge complaining about the table she’d been seated at. She felt she’d been given a bad one because she was neither a known critic, a celebrity or an important business person and she was, by her own admission, really rather bitter about it. So bitter that the food barely got mentioned in the review.

The tables are turned

The fact is that all restaurants have good and bad tables and the man or woman on the door decides where guests will sit. How do they make that decision? We talked to some front-of-house staff, on the obvious understanding that we wouldn’t reveal their identity.

"At lunch we have business regulars, men and women who bring their clients weekly and sometimes twice a week. Regular diners are very important to our income and we don’t want to lose them," explained one Soho maître d'. "I know these people have favourite tables, ones that give them status because of their location. When I see that these people have booked for lunch I make sure that ‘their’ table is kept free for them. If some tourist wants it, he’s not going to get it. After all, I am never going to see that tourist again am I, so what do I care? He will receive the same excellent food and service, just not at the best table. I see no problem with that."

"We have different kinds of celebrity tables," said the maître d’ of a swanky central London place. "If they are in a group then we assume they want to see and be seen and we have tables perfect for that. On the other hand we also have tables where they will not be so easily seen which, for various reasons, may be what they want. We hold a supply of both those sorts of tables back because celebrities are good for our business and we want them to come in as much as possible."

Then there is the look of diners. "I am not going to give a good table to a couple dressed in shorts and trainers," said a front-of-houser at another well-known place. "I don’t care how much money they may have, if they are not famous they are going to be pulling down the tone and I will seat them as far out of sight as possible. On the other hand, a beautiful couple well dressed and radiating chic will be seated somewhere nice. Even if they don’t spend much, they make other diners feel good just by being around and that’s great."

A table for two by the loo

What about the legendary table by the toilet, the one that adds the exciting aroma of Sanilav to the smells wafting off the plate? Who gets that? "Well our bathrooms are downstairs," laughs the maître d’ of our swanky spot, "so it’s not an issue here. In previous restaurants I’ve worked in we have had such tables, but we only used them if the place was absolutely packed and we never used them as some kind of punishment. We always explained the situation and let the guest decide to sit, wait or go."

And restaurant critics? They may book under assumed names but the majority have large pictures of themselves next to their reviews (the critic mentioned at the start of this article is one exception). So it would be a very dim maître d’ who didn’t spot the critic immediately and make sure they got a good table and attentive service. "Of course," says an insider from a Knightsbridge establishment, "we have their pictures pinned up in the kitchen. All the new staff are shown them so that, even if I am not at the door, there’s a good chance they will still be identified." He shows me the pictures: one of the critics seems to be eating something he really shouldn’t and another has some extra facial features, all courtesy of black felt pen. The man shrugs. "Not everyone loves them," he says with a grin.

Tips that will work anywhere

And what should a diner do if they don’t like where they’ve been seated? "Personally," says my man in Soho, "if someone asks to be moved in a polite and friendly manner, then I will always see what can be done. If they immediately start off with an attitude, then they’ve got no chance at all. I want everyone to be happy, and that includes me!"

Should restaurants seat people fairly or is it inevitable that status is everything? Do you have any  horror stories of being sat in the restaurant equivalent of Siberia? Let us know in the Comments section.

Why eating and tweeting can be a bad combination