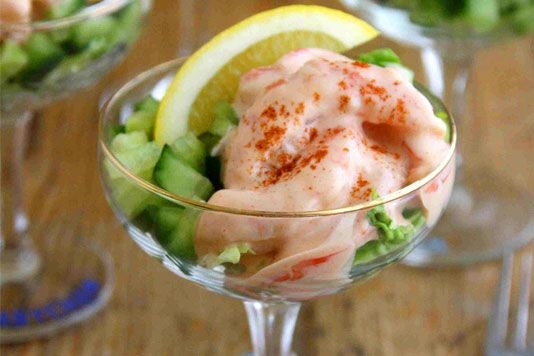 It's the starter that conquered the 20th century and the quickest way to import some Las Vegas glitz into your dining room. Jassy Davis traces the history of this speedy seafood dish

From the 1960s to the 1980s there was only one starter you could serve to get your dinner party off with a swing: the prawn cocktail. Served in a wine glass, this gloopy mix of defrosted prawns and sweet Marie Rose sauce balanced on a nest of iceberg lettuce was the sophisticated way to begin a night among friends. Steak and chips and Black Forest gâteau inevitably followed.

The prawn cocktail is so entrenched in Britain’s culinary landscape that people often assume it was invented here. Berni Inns, the chain of mock Tudor restaurants that dominated dining out in post-war Britain, have been credited with inventing the dish, as has Fanny Cradock. In fact, the prawn cocktail owes its origins to a 19th century miner in California.

Legend has it that after a successful day prospecting, a miner took his gold nuggets to a bar in San Francisco. He ordered a whisky and a plate of oysters. After knocking back the booze, the miner tipped his oysters in to the empty glass, doused them with vinegar, Worcestershire sauce, Tabasco, ketchup and horseradish and sucked them down.

Astonished, the restaurant owner asked: “What sort of mess do you call that?” With aplomb the miner replied: “This is what I call an oyster cocktail.”

The next day a sign appeared in the restaurant’s window advertising Oyster Cocktails. Four Bits A Glass. Within weeks every café and bar on the West Coast was selling glasses of seafood cocktail.

The cocktail sauce dolloped over oysters, prawns and crab was a peppy mix of horseradish, ketchup and chilli sauce. Spicy and moreish, these seafood cocktails were served in tumblers and bowls until the 1920s, when Prohibition rendered stemmed glassware obsolete. Unable to fill their wine glasses and coupes with alcohol, enterprising restaurants filled them with prawn cocktail, padded out with strips of crunchy lettuce.

But it was in 1950s Las Vegas that the prawn cocktail found its true home. The Golden Gate Hotel was the first casino to offer its gamblers a 50-cent shrimp cocktail in 1959.  Served in a tulip sundae glass, the Golden Gate’s cocktail was famous for being just shrimps and cocktail sauce – no salad padding to stretch it out.

In 2007 the hotel celebrated selling 25 million Original Shrimp Cocktails and they now claim to be up 40 million servings. The shrimp cocktail is still one of the hotel’s top-sellers, even though the price has risen to $1.99, and no Vegas buffet is complete without a regiment of sundae glasses filled with glistening seafood and scarlet sauce.

When the prawn cocktail made its way across the Atlantic, the zingy cocktail sauce was replaced with Marie Rose. Sweeter and, in the hands of nervous 1970s dinner party throwers, often blander than the original American cocktail sauce, Marie Rose’s convenience, speed and cheapness suited both domestic and restaurant cooks.

At its simplest, Marie Rose is a mix of ketchup and mayonnaise (or salad cream for those truly afraid of fancy foreign food) but Worcestershire sauce, Tabasco, lemon juice, brandy and sherry all have their place in this late 20th century classic.

In recent years there have been attempts to cheer up the prawn cocktail with Thai spices, fennel fronds, chopped tomato and fresh herbs, but the mayo-heavy version celebrated in Simon Hopkinson’s The Prawn Cocktail Years still holds sway. For my take on this 20th century staple, click here.