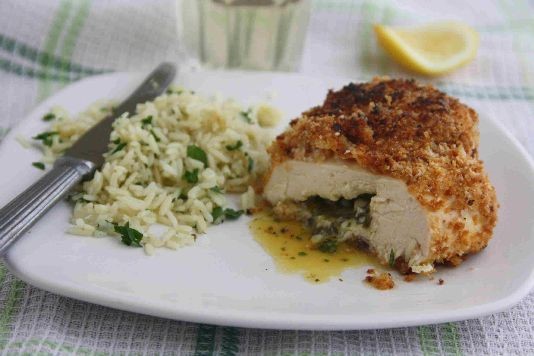 Named after the capital of Ukraine, invented in either France or Russia and christened in America (possibly), Jassy Davis discovers chicken Kiev's history is anything but simple.

Like beef Stroganoff, chicken Kiev has the whiff of 18th century Russian dining about it. Fried chicken breasts stuffed with garlic, herbs and butter is exactly the sort of thing you’d expect to come out of an Imperial Russian kitchen when a French chef is at the helm. But unlike beef Stroganoff, which has an aristocratic family to back up its pedigree, chicken Kiev has an ersatz mix of countries and cooks claiming it for their own.

The French are, as usual, the first to stake their claim for the invention of chicken Kiev. Nicolas François Appert, a Parisian chef who devised a method of preserving food in bottles and won 12,000 francs from Napoleon Bonaparte for his efforts, is credited with creating the forerunner of chicken Kiev in the early 1800s.

Appert’s renown was boosted by his French army-feeding exploits and one of his dishes, suprême de poulet, was a particular hit. A chicken breast pounded thin and rolled around lots of herb butter then fried, the dish made its way across Europe. Russian chefs, overlooking Appert’s Napoleonic associations, adopted it. In the Russian Empire it became known as côtelettes de volaille.

The Americans claim credit for giving chicken Kiev its name. Restaurants in the USA had started serving fried, breaded chicken breasts stuffed with garlicky butter in the 1930s. In Chicago, a former White Russian soldier, Colonel Yaschenko served “stuffed breast of chicken, Kiev style” in his restaurant Yar. Another Chicago institution, The Imperial House restaurant, was also well known for its crisp chicken a la Kiev.

The name stuck and after the Second World War it made its way back to Russia and started appearing on Soviet menus as a traditional Russian dish.

Behind the Iron Curtain

Russia and the Ukraine are obviously not content to let France and America take all the credit. The Russian food writer William Vasilyevich Pokhlyobkin claims to have traced the recipe back to early 20th century St Petersburg, where an anonymous chef created kotlety Novomikhailovskie for the Merchants’ Club.

A final flash of extravagance at the end of the Tsarist era, the dish disappeared after the First World War and the Russian Revolution. According to Pokhlyobkin, Soviet chefs revived the recipe for a banquet welcoming Ukrainian diplomats home to Kiev in the 1940s and renamed it kotlety po-Kievski – chicken Kiev.

The Ukraine’s claims are vaguer, centering on an unnamed Ukrainian chef inventing chicken Kiev in an unnamed restaurant in Moscow sometime in the early 1800s. But as Kiev has the honour of the dish being named after it, the Ukrainians triumph in the end.

Here in the UK chicken Kiev began to appear in restaurants in the 1960s. The stuffed chicken breasts were served with the wing still on, deep-fried and filled with hot garlic butter that gushed out in a shirt-ruining spurt when diners sliced in.

It was the ready-meal market that made chicken Kiev a family favourite. Frozen meals were already sold in supermarkets, but Marks & Spencer introduced the cook-chill ready meal in 1979. The first two ‘restaurant quality’ dishes on M&S’ shelves were chicken Kiev and chicken Cordon Bleu (chicken stuffed with ham and cheese).

The chicken Kievs cost £1.99 and they flew off the shelves, making ready meals respectable for the middle classes. They’ve remained a popular choice. In 2006 chicken Kiev was added to the official shopping basket used by the Office of National Statistics to track living costs, while M&S reported sales were up 25% in 2011.

A stateless meal with an obscure history, chicken Kiev’s future nevertheless seems secure. For my version of this garlicky favourite, click here.

It’s time for a retro revival