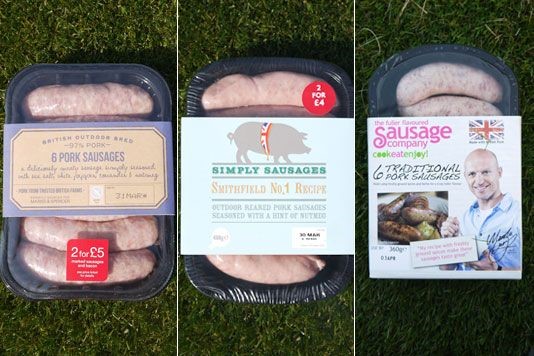 Bangers and mash, toad in the hole, the hot dog: the humble sausage is a British institution. Here's what to look for when buying a quality banger.

For anyone that cares anything about meat, you’ll know that a sausage isn’t just a sausage. In basic terms, a proper pork sausage will include meat, water, herbs and spices, as well as rusk or bread. In reality, particularly when examining the ‘wurst’ examples (ha! - Ed) this can mean only a minimum of 42-per-cent pork (including meat, connective tissue and fat), using artificial casing (they’re the ones you have to prick so that they don’t explode when cooking), and (depending on the quality of the purveyor) various preservatives and flavourings. That’s why looking at the ingredients list, or asking your butcher, about the content of the sausage is crucial.

This product describes itself on the front of the pack as “deliciously meaty and I’d have to agree it is just that. At 97% pork these were the meatiest of our taste test and yet still had a succulent, not too dense or crumbly, texture. They smelt delicious when cooking, barely any fat leaked into the pan, and they didn’t split or explode thanks to the natural casing. The meat itself was well seasoned, actually tasted of pork, and had a hint of spice. Juicy and tender and not too chewy or crumbly. Surprisingly they are also gluten-free. Nearly perfect. Indeed these sausages were awarded Silver at the Legendary British Banger Competition Awards last year.
What’s in them? British Outdoor Bred Pork (97%), sea salt, water, dried coriander, white pepper, dried onions, ground nutmeg, E223 (sulphites), ascorbic acid, natural pork casing.
How much? £2.79 for 6 sausages from Marks & Spencer. The store is currently offering 2 for £5 on marked sausages and bacon. See in-store for details.

The first thing that hits you in these sausages is a smack of nutmeg – they are strongly spiced but it works well. The natural casing provides that wonderful natural pop as you cut into the sausage and the meat (all 88% of it) is really quite succulent. The texture is a bit more mealy and chewy than its M&S counterpart, and we did detect the odd bit of gristle, but otherwise it was a very tasty banger. Plus, once again they have been made using outdoor reared British pork (on farms approved by Freedom Food), which we like.
What’s in them? Pork (88%), breadcrumbs, free-range egg, salt, nutmeg, white pepper, sodium metabisulphite, coriander, rosemary extract, natural pork casing.?
How much? £2.49 for 6 sausages from Waitrose. The store is also offering 2 for £4 on marked packs. See in-store for details. For specific branches visit Simply Sausages.

With the least pork, (although still an impressive 80%) these sausages were a bit more greasy but still had a good, slightly sweet, flavour and balance of seasoning and spice. Rugby player turned TV cook Matt Dawson created the recipe, which includes one of pork’s very best friends, sage. If you like your sausage texture quite smooth, then you’ll like these, although again there were a few gristly bits. The pork used is British and the sausages had the Red Tractor symbol.
What’s in them? Pork (80%), water, breadcrumbs, sea salt, sugar, sage, white pepper, nutmeg, coriander, tetrasodium diphosphate, disodium diphosphate, dried onion, sodium metabisulphate, ascorbic acid, natural pork casing.
How much? £2.99 for 6 from The Co-op and £2.75 at Tesco (with a 2 for £4 offer until 8 April).

If you like to be a bit more adventurous when it comes to sausages, how about trying an award-winning venison sausage with chilli and chocolate? Or a roobanger and red wine sausage made with a combination of kangaroo and pork back fat? Maybe one of Lucifer’s Matchsticks? That’s the beauty of sausages, as long as they are made well: you can have whatever flavour you’d like. Or you could even join a sausage club. Perhaps just don’t tell the neighbours...