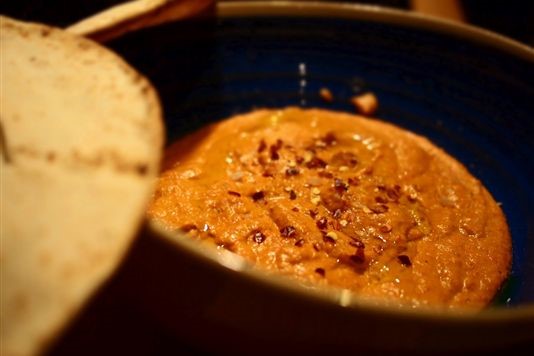 Muhammara is a sweet red pepper and walnut dip hailing from Aleppo in Syria and is popular across the Middle East.

Bright red and beautifully sweet, Muhammara is found on tables across the Middle East, most ubiquitously in Syria. Like its better-known cousin Baba Ganoush, Muhammara takes the smoky sweetness of charred vegetables (in this case red peppers), delicately balancing their flavour with a handful of other Middle Eastern ingredients. These include some lightly toasted walnuts, pomegranate molasses and garlic, all beaten to a pulp with some olive oil and lemon.

The texture of Muhammara can vary hugely on a spectrum of smooth to grainy, and in Syria it always accompanies bread. Despite recommendations you might find for pairing this ‘Middle Eastern pesto’ with meat or fish, chef and author Anissa Helou is insistent that the half-dip/half-spread is best eaten and shared with pita: “The Western approach of eating Muhammara with meat can taste good, but it isn’t traditional. Muhammara is a mezze.”

Unlike other mezze from the region, Muhammara is universally acknowledged to come from a specific city: Aleppo. Located in north-west Syria, on the border with Turkey, Aleppo was historically a prime location on trade routes between the Middle East, Asia and Europe, and its culinary influences are broad. This perhaps accounts for the “complexity” and “sweet and sour” notes of Syrian food that Helou described to me. Negotiating so many tastes distinguishes Aleppian cuisine from others in the Middle East, such as the purer, cleaner flavours of Lebanon.

As you might guess of Syrian sweet and sour, balance is key. Muhammara is no exception. The bitter kick of the walnuts compliments the sweet peppers – but only in moderation. Similarly, garlic is essential but in small amounts, especially as this recipe demands that it is blended, not chopped. The rich and fruity sweetness of pomegranate molasses is possibly most crucial of all and can be found in Middle Eastern shops or supermarkets with good speciality selections.

Like most popular mezze dishes, Muhammara has been reinterpreted across the Middle East. In Turkey it’s known as Acuka and eaten as a spread on bread for breakfast. I’ve researched the difference between Acuka and the Aleppan original, only to conclude that it is just semantic – like Baba Ganoush and Moutabal.

Muhammara is also popular in Sephardic Jewish cookery. You can find a recipe for it in Claudia Roden’s A New Book of Middle Eastern Food.

In the UK, it’s the Lebanese who really trumpet Middle Eastern delicacies – not least for Anissa Helou, whose favourite restaurant Al Waha on London’s Westbourne Grove does a particularly delicious, granular version of Muhammara. “Alwaha’s Muhammara is a coarser version than you would find in Aleppo, more like a spread. This is a mezze whose consistency varies from grainy to smooth depending on where you eat it.”