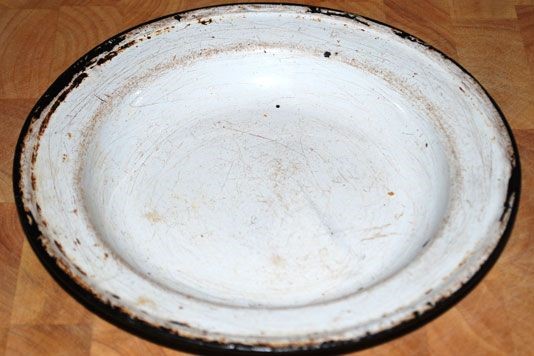 As we celebrate the British Pie, Andrew Webb stops to consider a kitchen heirloom from his family's past.

This is my grandmother’s enamel pie tin. It's over 50 years old and has held more pies than I’ve probably had hot dinners. What’s interesting is that this pie dish, a mere 8” across, fed the whole family at meal times, with each portion of pie accompanied by heaps of mashed potato and plenty of veg.

A good hearty pie eaten communally not only sticks to the ribs, but helps bond a family together. For me, few things say ‘love’ more than a homemade pie.

My maternal grandmother came down to the midlands from Glasgow during the war to work in the factories. She came from a generation that pretty much cooked everything from scratch. If you wanted cake, you made one, not as part of a ‘lifestyle’ choice but because that’s what you did. She also owned - and used regularly - a chip pan. Do people still use chip pans anymore?

My grandmother’s pastry was, I can objectively say, better than your grandmothers’. The recipe was never committed to paper because it was in her head. She used half fat to flour, and the fat was half butter and half lard. This coupled with a delicate touch - lift and sift - resulted in golden flakey shortcrust pastry. She also used to roll out the pastry with a milk bottle... why? Because it was heavy and rolled well apparently.  In the days before fridges, she would keep the milk in the pantry on the marble ‘thrawl’ (an old word for a marble shelf found in pantries). The pantry also kept pastry cool.

The filling was always a nice bit of stewing steak, slowly cooked and then allowed to cool. It fell apart at the touch of the knife (incidentally, Scots have a fine tradition of steak pie on New Year’s Day), and the gravy was rich, thick, and definitely didn't feature wine or bouquet garni.

Tell us about your kitchen hierlooms

And thus the world turns: my mum has an old ‘Milk’s Gotta Lotta Bottle’ tea towel, the colours now faded, which perhaps one day my daughter will covet. Or maybe the small wooden spoon that’s been worn down on one side from years of stirring pans?

Often in the settling of one’s affairs the kitchenware is given scant thought, and it’s off to the tip or the charity shop with it. Yet for me, these are the objects that have the most of a person’s life in them; the knives, spoons and utensils they held and cooked with, and fed and cared for their family with.

I’m sure your family has its own kitchen heirlooms, lurking in the corner. I’d love to hear your stories in the comments section below.