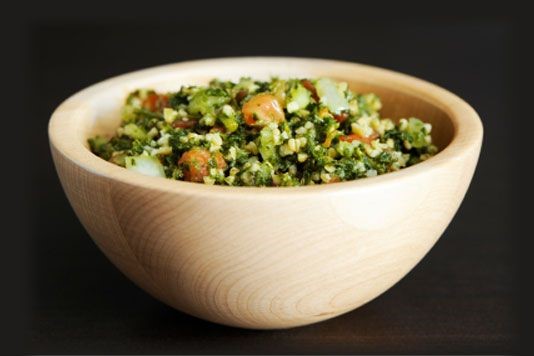 Salads are a perennial feature on Middle Eastern tables, both complementing a mezze spread and thrilling palates in their own right.

There’s much to learn from a Levantine approach to salad: the regularity with which it’s eaten, the emphasis on high-quality seasonal produce, and the way vegetables are celebrated as the stars of the show, augmented by dark extra virgin olive oil, and punchy quantities of herbs and spices.

In the introduction to his book Plenty, Yotam Ottolenghi stresses the importance of “real fruit and veg”, of which you know and trust the provenance. He says that the multitude of wonderfully fresh ingredients he grew up using in Israel meant “vegetarian cooking didn’t turn out to be a chore.” For anyone interested in making a great salad – particularly one of Levantine origin – it’s important to choose your ingredients with care. Here then, are three salads that are easy to make, and taste fantastic.

Its name derived from the fried pita bread that forms its base, fattoush is perhaps the most popular Middle Eastern salad and can be found across the Middle East. It varies widely, the only constant being the pita crisps, a good citrus dousing in the form of lemon and sumac (an earthy red, tangy spice) and a basic trinity of vegetables: cucumber, tomato and radish. Topped off with mint and parsley, this is a bright and refreshing addition to any meal, especially in the heat.

Neither Claudia Roden nor Anissa Helou err from the fattoush of their upbringings, stressing the importance of simplicity. Typically, Greg and Lucy Malouf make theirs a little more complicated in Arabesque, choosing to fry the pita in butter (I prefer to bake or grill it in a little oil) and adding crushed garlic and balsamic vinegar to the dressing. Chef Stevie Parle (a huge advocate of Middle Eastern food), adds flourishes to traditional recipes in The Dock Kitchen Cookbook. He’s now developed “a kind of winter fattoush”, using celery and fennel to replace them, and adds sweet warmth in the form of pomegranate molasses – another favourite Levantine ingredient.

Tabbouleh is another very simple, classic Middle Eastern salad, made principally with masses of parsley, bulgur wheat, finely chopped tomato and shallot, and a sharp lemony dressing. Ottolenghi highlights the Western tendency to get the ratio of parsley to wheat wrong, often treating the latter like couscous. In fact, tabbouleh puts parsley firmly in the spotlight, showcasing the herb’s ability to form a salad base, a popular practice in Levantine cuisine for centuries. Tabil, from which the word “tabbouleh” is formed, means seasoning, and this dish sees seasoning become a centrepiece.

Authentic tabboulehs are a sea of green, punctuated by glimmers of tomato and specks of wheat. In Modern Mezze, Anissa Helou suggests two other options – rice tabbouleh (simply exchanging bulgur for basmati) and white tabbouleh, replacing parsley with cabbage and adding paprika. I like chef Stephen Gadd’s variation too, a “winter tabbouleh”, using fennel, chicory and cauliflower.

White cabbage is a cheap and popular ingredient across the Middle East, and this salad of its leaves – chopped finely – has a delightful crunch. It’s a bit like a citrusy Levantine coleslaw, and the Maloufs recommend it to accompany kibbeh, Lebanese mince croquettes. Like all these salads, there are endless combinations of ingredients, but its classic form is cabbage, tomato, garlic, mint and the reliable zingy dressing of fresh lemon juice and extra virgin olive oil.

Ottolenghi embellishes this salad with kohlrabi, sour cherries and dill, but the blandness of the cabbage means you might try any combination of other fruit, veg and herbs to give salatet malfoof some added kick.

Light and healthy but with strong, lively flavours, these three Middle Eastern salads couldn’t be further from a dull green salad or ‘rabbit food’. They make a colourful addition to meals, particularly as summer approaches, and are easy and economical to boot.

To get the best result, invest in some top quality extra virgin olive oil – more dark green than yellow in hue – and always have lemons and sea salt to hand. Fresh mint and parsley are omnipresent in Levantine cookery and luckily both are easy to grow and maintain at home. Salad days couldn’t be simpler or more delicious.