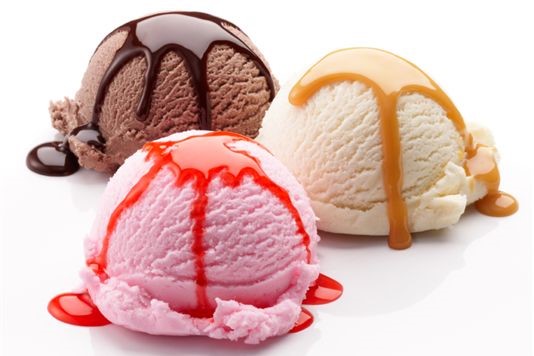 To celebrate the sunshine, team lovefood taste-tested a bunch of ice creams to help you make the best choices this summer.

From salted caramel popcorn to blackcurrant clotted cream, nine volunteers tried all sorts of flavours (8, to be exact) in a blind taste test one lunch time. Here are our results, starting from the poorest performer and working upwards…

Score: With a mark like 36%, it’s pretty obvious that people prefer a scoop of creamy ice cream to low-fat frozen yoghurt. But then again, isn’t frozen yoghurt supposed to be super fashionable? And at only 90 calories per 1/5 of a pot, there’s no guilt hangover.

What they said: “Yuck – I couldn’t even finish it,” and “this doesn’t taste happy” pretty much set the tone.

Score: 48% is quite surprising for a M&S tub. But our taste-testers thought that too much was going on in this ice cream – what’s wrong with just cookies ‘n cream? Why the cake, too?

What they said: “It tastes sandy”, and “far too sweet” were among the negatives; although one did declare it a 9/10, comparing it to “a lovely KitKat”.

Score: What a shocker! Heston came top in our hot cross bun taste test last year, but here he only just pips M&S at 49%. Perhaps his flavours are just too fancy for something so simple as ice cream.

What they said: “The popcorn filling was horrible!”, “it got stuck in my teeth”, and “nice ice cream ruined by the bits”.

Score: Everybody loves Carte D’or… or do they? Our testers gave the latest flavour only 56%, mainly because they didn’t appreciate the amaretti biscuit topping.

What they said: What to one person was a “great macaroon flavour” was to another “totally overpowering almond-y taste”. The amaretto was too strong for most of our testers, and one claimed that the biscuits were stale.

Score: Jude’s make their ice cream in a Hampshire barn, and have bravely attempted the same salted caramel flavour as Heston Blumenthal. He gets 49%, they get 66%!

What they said: “super sweet, rich and tempting”; “my favourite!”

Score: 68% for sheer creaminess and depth of flavour. The blackcurrants did put some people off, though – maybe try their honeycomb caramel flavour instead?

What they said: “Definitely the creamiest of the lot”; “I loved the purple colour and think it would look great plopped in the middle of a meringue nest”.

Score: And the silver goes to...Simply ice cream, the brainchild of a mother and daughter team based in Kent. 71%.

Score: Hurrah for the little producer! You won't find any artificial additives, stabilisers, or colours in Taywell’s ice cream, straight from Kent. 77%.

What they said: “Superb – the best I’ve ever tasted”, and “devilishly rich” were among many compliments.

We felt it unfair to include ice lollies in an ice cream taste test, but mention must go to Icely Done frozen cocktail sticks... yes, that's right: cocktails in an ice pop! Frozen tipples include Absolut lemon vodka and raspberry, Havana Club rum and coconut; and Campari and blood orange. Beefeater gin and lemon, however, was the undoubted favourite in our office.

Have you tasted any of the ice creams (or lollies) in our test? Which one is your favourite? Talk to us in the comments box below...

This is a classic lovefood article that has been updated.