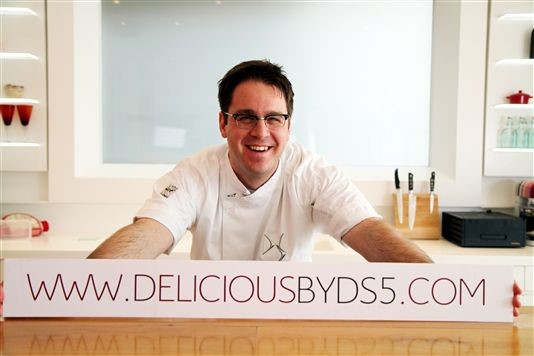 Eating for charity; it's the latest foodie fashion. Charlotte investigates.

A five course meal, cooked by 2011 MasterChef winner Tim Anderson, in an uber cool Shoreditch warehouse, for only £5? Surely that makes me the charity case?

But the dinner – which comprised a course for every sense, including a beautiful ‘visions of beetroot’ plate served with goats’ cheese and wasabi cream; and a noisy ‘sounds of bacon’ with pork rind popping candy and a pancetta lolly (pictured left) – was actually all in aid of FareShare, a food poverty charity which redistributes surplus goods from food and drink industries, so it doesn’t go to waste.

Everyone who attended Tim’s Delicious by DS5 pop-up – which he set up in association with Citroën UK, whose Facebook page wannabe diners had to apply for tickets through – had to pay a fiver, which is all it takes for FareShare to deliver 20 meals. Not that many guests stuck to one green note; as the Prosecco flowed, so did the extra donations.

Charitable chef Tim said of the project: “It’s really allowed me to stretch my creativity and try some exciting new gastronomic techniques… the best part is that we’re bringing this menu to the public for just five pounds and benefitting a really great charity at the same time.”

And FareShare’s Tahel BarEl added: “With this support from Citroën and Tim Anderson - reaching out to the public through their appetite for great food - we can highlight the importance of efficiency in the food industry and how it can help FareShare support more communities across the country.”

Say it with Star Wars

It’s not just Tim who’s feeling charitable. Down the road at Liverpool Street’s Tsuru Japanese restaurant, a medley of well-renowned foodie bloggers including Food Urchin’s Danny Kingston, and Meemalee’s MiMi Aye set up a ‘Stir Wars’ themed pop-up on May 5, all in aid of Make A Wish Foundation.

And being the Chewbacca buff he is, lovefood editor Andrew Webb went along and met Darth Vader. Here he is, having fun with the Dark Lord of the Sith himself. (I also scored 44.5/44 in the quiz too - Ed.)

The menu included Deathstar bites, sliced Wampa Haunch and Slivilith cream pie with colo clawfish jelly. However the star of the show and ultimate geek homage were the Tauntaun roll with spiced guts, which were noodles in a spring roll, and included a little tofu Luke figure, echoing the scene in Empire Strikes Back when Han puts a frozen Luke inside the belly of a dead Tauntaun. Yum! Finally here's a very odd video of Darth Vader cooking... we're assured he wasn't the chef at Stir Wars.

Have you been to any charity pop-ups? And do you think it’s the best way to raise money for charity? Talk to us in the Comments box below.

What next for MasterChef 2012 winner Shelina

How to reduce food waste?