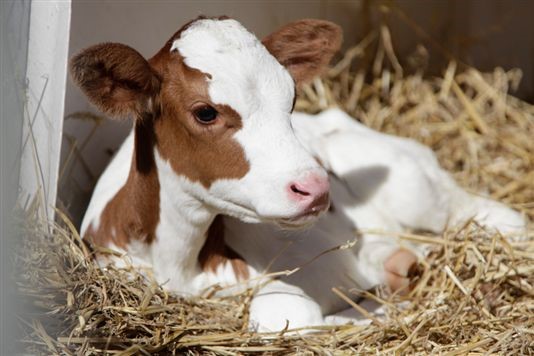 Next in our `cruellest foods' list is. veal. Read on to find out how it's made, what it tastes like, and whether or not it's still legal.

Veal is meat from young calves, which are usually slaughtered at about six months old.

The word 'veal' comes from the French, 'veau'. It was only the Norman-French aristocracy of medieval England who were privileged enough to eat the meat, and hence it was them who named it. But the word for the actual animal, calf, is English in origin, because it was Anglo-Saxon peasants who had the job of rearing them.

How is it prepared?

Traditionally practiced on the continent (Switzerland, for example, is a big veal producer), veal calves are chained to closed individual pens in the dark, and fed only milk. Restricting movement prevents the calves’ tough connective tissue from forming, and not seeing sunlight keeps their meat as pale as possible – both characteristics considered desirable of veal.

The problems attained from living in crates range from lameness to depression and anaemia. And as this video of a veal farm in America shows, the calves’ hygiene is rarely of concern.

Often compared to beef, but finer in texture, lower in fat, and lighter in colour.

It’s usually in the form of cutlets and you’ll most likely find it on a French or Italian menu.

Is it still legal?

The UK was one of the first countries to outlaw the use of ‘veal crates’ in 1990, followed by an EU-wide ban in 2007. But there are concerns that EU standards aren’t high enough – for example, space allowances for older calves in the EU are only 60% of the legal minimum required in the UK.

Spurred on by a demand for ethical veal, and to stem the tide of unwanted bull calves being destroyed at birth in this country, Britain has started to produce its own ‘rose veal’ - veal from farms in association with the UK RSPCA's Freedom Food programme. Think proper bedding, no isolation, and a balanced diet.

But in an interview with The Guardian, Rose Gray of River Café said: “I've never come across a British veal good enough to use in our restaurant. It just has no flavour, no texture and not enough fat”. Allegra McEvedy, however, thinks it's better than the foregin muck.

Think veal is bad? Brace yourself, then, for #2 in our list of cruellest foods we eat...