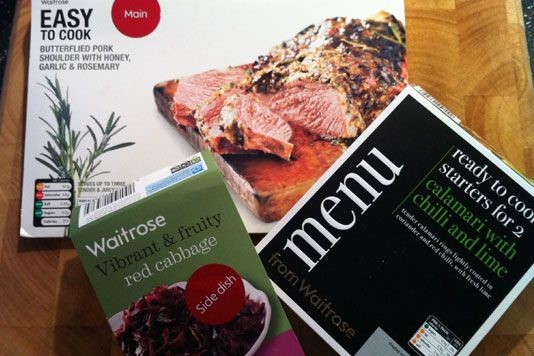 M&S and Waitrose both offer dinner for two including wine for a tenner. Sounds great, right? Andrew Webb finds out.

While I wouldn’t go so far as to describe myself as a 'grocer groupie', I definitely do most of my shopping at Waitrose. While there the other day I spied the latest meal deal offering - dinner for two for £10. They’re not the only supermarket to offer this. M&S also do the same thing, called Dine In For Two.

On the one hand you can see the appeal; starter (or a pudding), main course, a side dish, and a bottle of plonk for a tenner. What’s more you can get it all from the one cabinet, to avoid traipsing around the store; perfect for poor commuters who’ve spent the day at work being ‘busy’. But are they good value? I decided to find out.

So from my local branch I chose the following meal deal:

The squid was rather nice, though the single wedge of a lime you got with it was a little dry and brown around the edges. The red cabbage was a bit too sweet for me too and the meat looked a little grey, rather than the juicy pink it does on the packet. However the fennel (not listed in the title, only in the ingredients) provided a bit of an interesting taste contrast. The honey was nowhere to be seen - or tasted as it were. The plonk was as bland and one dimensional as you’d expect, though I did manage to finish it.

So what would it cost to buy these ingredients and make the dishes from scratch? Well looking at Waitrose.com, here’s how I costed them up.

I’d probably add a bottle of Cuvée Chasseur Rouge, Vin de France 75cl for £4.69. This is ‘a light, fun, fruity red with easy-going character’ according to Olly Smith and currently on offer at £3.26 apparently.

So my fag packet calculations reveal the raw ingredients cost just shy of £20 compared to the deal’s tenner, and there’s not much in it if you buy them when not on offer. Of course by buying the raw ingredients you’re getting twice as much shellfish and meat, and three times as much cabbage, plus all the other bits you’ll have leftover. Gathering all these ingredients and cooking them will obviously take more time however, which has to be taken into account.

So are they good value?

Well yes, if you’re time poor and don’t really enjoy the act of cooking and aren't really bothered about taste. No, if you’re looking to save money or feed more than two people. What I found most interesting about these deals, however, is the marketing. A ready meal on its own has the slight whiff of a lazy, solitary diner who can’t be bothered to cook. But throw in a ready-made starter, and a pudding, offer a limited choice and the idea of creating a menu, and the thing is suddenly rebranded as a restaurant experience in your home - you've got to admire the genius.

The advertising accompanying these deals would seem to back this up. Whereas a ready meal might be eaten on the sofa from the very plastic tray it was cooked in while staring at the telly, meal deal ads feature plates, napkins and, let’s face it, the promise of romance.

As ever with food, you pays your money and you takes your choice. For me though, part of the joy of food is the preparing and cooking of it, letting your mind drift, having a glass of wine and generally unwinding. I realise this isn’t for everyone. One other point: I don’t own a microwave, so the cabbage had to be cooked in a pan. The instructions for cooking the squid also recommended flash-frying in a pan, so by the end I had nearly as much washing up as I would have if I’d made the dishes from scratch.

Do you think these deals are good value? Let us know in the comments below.

Price wars: How you can find the best deal

Enough of the world's most expensive foods!