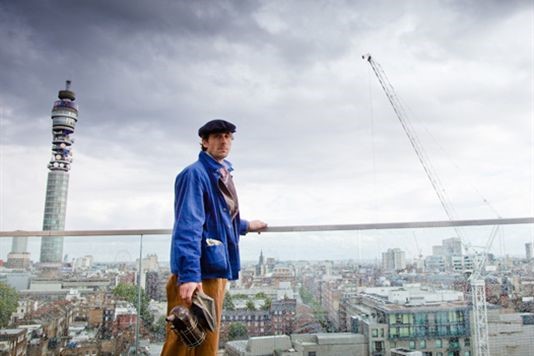 Urban beekeeping. Just about the trendiest thing you can do nowadays. So what's it all about and why should we be doing it?

To explain the concept of urban beekeeping, let us take Steve Benbow as an example. Ten years ago, Steve gave up a travel photographer job to fulfil his dream of becoming a bee farmer. Only one problem though: the distinct lack of meadows and hollow trees in London’s Tower Bridge, where Steve lived.

The only viable space was the roof of the 6th storey ex-council block flat that he lived in; it may not sound like a bumble bee paradise, but as Steve told me himself, his first hive behind the lift shaft “worked like a dream”. He now runs a thriving urban beekeeping business (The London Honey Co.), managing hives all over the country and supplying top chefs such as Marcus Wareing.

“I’ve always been interested in bees and creepy crawlies,” he told me. “I’m a countryside boy from Shropshire, whose grandparents taught me all I needed to know about bees [pictured left]. I first started seriously thinking about keeping bees in 1998, and my job allowed me to visit bee farmers all over the world in busy cities such as New York, Tokyo, and Rio. I knew that I could do the same in London, and I was really keen to bring a slice of the countryside to such a big city.”

Steve, who has recently published a book called The Urban Beekeper, says that every pot of honey tastes different. “There’s no such thing as a ‘London taste’ – bees are extremely sensitive to their surroundings. For example, the honey which comes from my hives on top of the Tate Britain tastes completely different to Tate Modern honey.”

Steve is one of hundreds of urban beekeepers now; there’s a whole website dedicated to encouraging the hobby (urbanbees.co.uk), and the celebs are getting in on it too. TV’s Kate Humble runs a ‘beekeeping and beeswax’ course at her teaching farm in Monmouth, promising a hands-on introduction to honey bees, a lesson on beeswax, and a guide to being a beekeeper. She even throws in lunch at Katherine Marland's kitchen, too.

Urban beekeeping has far more benefits than keeping our toast well slathered. Here’s why we think it’s a good idea:

1. Bee populations are still declining. For whatever reason (and there are a multitude of explanations), we don’t have enough honey bees in this country. So buying your own and keeping them healthy is a great way to help the numbers creep back up.

2. We don’t like how farmed bees are treated. In modern agricultural practices, bees are kept for maximum output using minimal resources, just as factory farmed animals are. Some are fed sugar water instead of their own nutrient-rich honey, and all are confined to small, compact hives designed to allow constant interference from the farmers. Let the bees breath!

3. Urban bees are healthy bees. Those kept in urban areas are less likely to encounter large amounts of pesticides and insecticides which are commonly used to treat crops en masse in countryside fields. Indeed, urban beekeeping helps colonies maintain optimum health because of the safe, non-invasive space they’re kept in.

4. We need the bees! They play a crucial role in the earth’s ecosystem. They pollinate trees, plants, and crops that we rely on as food sources, and some say that the little buzzing critters help reduce fumes in the cities by filtering them out of the atmosphere.

Do you keep your own bees? Where do you get your honey from? Talk to us in the Comments box below.

All photos courtesy of Julian Winslow, bar that of Kate Humble.