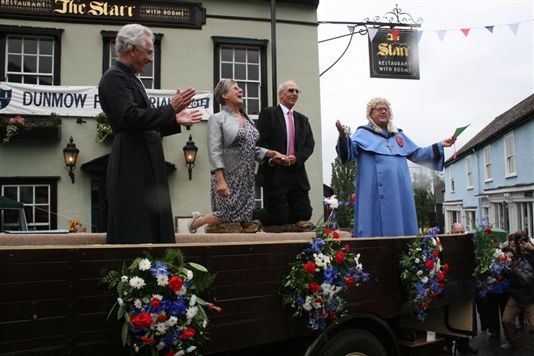 Would you wager your marital bliss for half a pig? Sam Bilton met some couples who did just that this weekend.

We were gathered in a marquee on a soggy July day to witness something which would have made a fine preamble to the Olympics, had it involved sports. But this event is imbued with far more honour than the 100 metre sprint. For it is not the contestant’s sporting prowess that is at stake, but their conjugal happiness.

For hundreds of years the Flitch Trials, a quirky version of Mr & Mrs, have taken place in Great Dunmow, Essex. Reputedly happily married couples have to prove that they have never wished themselves unwed during the previous 12 months and a day. Their claim is assessed by a jury of six maidens and six bachelors, and the coveted prize is a flitch of bacon (half a pig, ceremoniously pictured above). It’s an ancient custom mentioned by Chaucer in the Wife of Bath and was the subject of a book written by Victorian novelist William Harrison Ainsworth.

The marquee is packed despite the weather, proof of the fact that there is still a lot of interest in the event today. In an era where divorce is on the increase, perhaps the audience is eager to see what a happily married couple looks like.

“I can assure all those Doubting Thomas’s that marriage is alive and well,” said Judge Michael Chapman, who has presided over the Flitch Trials for around 20 years. “People still hope and expect that when they make their vows they will have found a partner for life.”

The bacon and empty Flitch Chair (pictured above) are paraded through the streets prior to the start of proceedings. Five trials take place during the day and in theory all five claimants could win a flitch. There is a jovial atmosphere in the tent as the wigged and gowned barristers take their places for the trial – two each for the bacon and the claimants.

Everyone involved looks very serious but it is soon clear that this is to be an entertaining event, as the claimants are comically cross-examined about their relationship. The first couple, The Buttimores (pictured here on trial), are ribbed about their shared passion for sci-fi.

“You need to decide,” Mr Monk, the barrister representing the bacon, asks the jury, “is the force with these two?”

The Buttimores have convinced me of their happiness but we have to wait 15 minutes for the jury’s verdict. How had they found the experience?

“A bit nerve-racking,” said Mr Buttimore. “But we don’t care if we win the Flitch. We know we love each other.”

Just as well. The jury declares that they have found for the bacon, amid shocked gasps from the audience (sadly, we are not told why they arrived at this verdict).

The next couple, The Gilhams from Spain (pictured left), are successful. But the judge wonders how they will transport half a pig home? The solution is to donate their flitch to the Farleigh Hospice where Mrs Gilham worked for a number of years before moving abroad.

The Gilhams are carried shoulder high in the Flitch Chair to the Market Place, where they take the oath kneeling on some rather uncomfortable-looking pointed stones (top photo). The Buttimores are forced to walk behind an empty chair, but are awarded a gammon as a consolation prize.

The next Flitch Trial takes place in 2016.

What to cook with that pork?