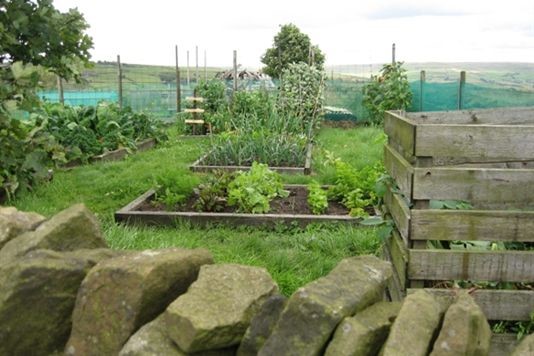 An edible town in West Yorkshire is teaching the world how important it is to Grow Your Own.

Free food for all Four years ago, two green-fingered residents of Todmorden in West Yorkshire – Pam Warhurst and Mary Clear – set up ‘Incredible Edible’, an ingenious concept which sees residents of the town growing communal fruit 'n' veg for everyone to pick, without having to pay a bean for it.

From the churchyard to the fire station, on the roundabout and in primary school gardens, almost every green patch is used to grow the goods. There is no limit to how many apples, apricots, cabbages, carrots, and the like that residents can pick and take home.

The movement started off as just a few herb gardens, but now around 900 fruit and nut trees have been planted in Todmorden. Hundreds of vegetable patches have been dug, local schools have included the scheme as part of the curriculum, and Pam and Mary are two of around 350 volunteer gardeners. Not bad, considering that Incredible Edible doesn’t even have its own office, staff, or telephone.

“That’s enough of that” So what inspired Pam and Mary, the dynamic duo, to launch such an innovation? I caught up with Pam, aged 61, earlier this week. She told me: "It all started with a conference I went to held by Tim Lang [pictured left], Professor of Food Policy at City University, London. He said that we are running out of resources and our children will pay the price. So I got on a train, thought 'that's enough of that', and invented Incredible Edible. Although to be fair, it was Mary’s daughter who came up with the catchy name."

Pam, who works full-time for a South Pennines rural regeneration company, added: "The basic principle is ‘do, don’t talk’. We wanted to avoid red tape, bureaucracy and consultants. Food is the uniting language for engagement, and we concentrate around three foci: community, learning, and business. When all three really get going, you have a stronger, kinder community."

How does Pam measure her success? "Well, 46% of local food businesses said that Incredible Edible has had a positive impact on their sales, because it makes people see how wonderful growing and eating local is. Plus two social enterprises have been created to grow local food; more than 90% of Todmorden residents know about us; and the local garden centre has never sold so many seeds and fruit trees."

And on a wider level, more than 30 other areas in Britain have taken on the Incredible Edible name, and similar schemes have reached every continent in the world.

Pam explains why she thinks the idea is so popular: "It's possible and positive. Many people know we have to change, but how we do that is the question. At a time when it all seems too much, it's time to demonstrate the power of small actions. Once you start, you know you have something to offer, and it just feels right. Not waiting for permission, or a cheque; just knowing you are doing your bit to make the world kinder.”

So with worldwide domination already ticked off, is there really anything else left for Pam and Mary to do? Of course there is.

"It's still early days for us. Yes we are trying to grow a lot more of our own food, but at the heart of all we do is the desire to go back to that first challenge: how do we live our lives differently? How do we use fewer resources? How do we share more and care more?

“One of the things we’ve started doing is to run cookery classes in the street, in the pub or in people's homes with our Come Dine with Me programme. There's no point growing fruit 'n' veg if no one knows what to do with it!”

There’s another campaign, too: Every Egg Matters. “We designed a map of the town and marked all those individuals selling eggs to neighbours. We started with four and now we have 64! Raising awareness meant that residents were going into shops asking for local eggs, so some farmers upped their flocks of free range birds, then went on to meat birds. One local farm started keeping rare reed pigs and now sales have doubled. And a local dairy farmer who was toying with producing cheese now makes five different varieties, some award winning!"

Another local farmer is experimenting with growing oats and barley, and there’s been a big increase in the number of local food stalls selling pies, pickles, and takeaway meals at the local market. Plus most Todmorden caffs use local produce to some degree now.

“We are going way beyond fruit and veg,” says Pam. So watch out, world.

Do you think the residents of Todmorden are onto a good thing? Would you like to start something similar in your town? Talk to us in the Comments box below…

All images taken from the Incredible Edible site.

The 10 best places to BBQ in the UK

The best watercress producers in the UK