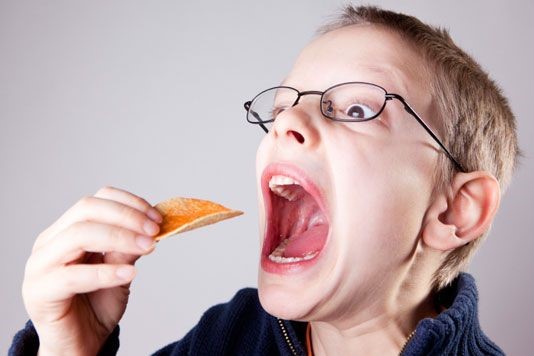 Fiona Faulkner investigates the complex world of E numbers and additives - with a few surprising home-truths for parents.

Which of the following would you rather see in your child’s lunchbox?

A wholemeal ham sandwich – the one here looks nice.

A low fat fruit yoghurt such as this one?

Or a packet of crisps - how about one of these?

In researching this article I hadn’t intended to kick-off with a trick question. But I do want to make a point. Because actually I think I’d be as happy with the crisps as I would the other two. The Hula Hoops yes, have additives (including E508, potassium chloride) but these days I’ve been asking a lot of questions about E numbers - and even recognising that I’ve adopted a sort of middle class tier-system for myself. So before we throw out the baby with the Ribena shouldn’t we all understand a little more about E’s?

Did you know for example that some E numbers are naturally occurring, or organic? Back to the Ribena and if you look at its ingredients you’ll see that it contains something called Anthocyanins (E163). This is a completely natural colouring, extracted from grape skins. E412 meanwhile – guar gum, quite often found in your child’s ice cream - is a plant extract. The point is a lot of us haven’t stopped to find out the facts. Many of us believe that E numbers are all a bunch of toxic chemicals - when in fact the ‘E’ simply refers to a classification system, albeit a foreboding sounding one.

Having said that, there are certainly some E’s that are probably best left to experimental rock stars. In particular the Southampton Six – a motley crew of colourants. Likewise this site claims to have a super list of what to avoid if you don’t want your toddler to have a “temper tantrum” (Note that I’d also add to that list: don’t turn off what they’re glued to on Cbeebies).

The fact is, I’d rather not include E’s as part of my family’s diet, because for the most part I can’t see their nutritional benefit. But neither do I have a huge issue with a moderate intake of something that’s not only been scientifically tested but that also protects my food from going off or tasting terrible. And who am I to deny my kids the same kind of fun I had as a ten year old.

Nitrates however are a trickier one – in my opinion at least. They’re added to processed meats, such as ham, to protect against botulism, which could kill you. On the other hand, so could bowel cancer – and some cancer charities are very shouty about this, along with its links to processed meat.

As for the low fat / reduced sugar yoghurts and squash, popular with many parents, next time you pick one of these up, take a look at the label. Chances are there might be some artificial sweeteners in there to compensate.

I don’t like artificial sweeteners. I admit that I’ve been slightly brow-beaten by various online evangelists - with admittedly little more than anecdotal evidence to suggest that artificial sweeteners promote a variety of ailments. Likewise it’s never particularly encouraging to read headlines such as this. Or to think that entire books have been written – by men in white coats! – to warn us off the things.

Kids should eat chocolate, not raisins

Interestingly In May 2011, the European Food Safety Authority was asked by the European Commission to bring forward a new investigation into the safety of aspartame, one of the most controversial sweeteners. The results are expected to by the end of September. So while the ‘healthy eating for kids’ mantra is everywhere, it’s clearly more complicated than we’d like to think.

Scientists in Switzerland for example are discovering that cartons of breakfast cereal are leaking deadly chemicals, while dental experts in London are advising that rather than giving kids fruit juice and a box of raisins, “it would be better for their teeth if they were given a glass of water and a handful of chocolate buttons instead.”

If it sounds like I’m asking more questions than I’m answering, I apologise. There’s a lot of information out there and I’m just skimming the surface (as an example, type the words ‘E numbers’ and ‘children’ into Google – then write off the next three days of your life).

So perhaps in conclusion all I can do is re-visit one of my most overused phrases: everything in moderation, including moderation. After all, excess of anything – including salt, sugar, and even water – can kill you. On that note, I’m off to pour myself a heady cocktail of fermented grape juice and E220. Sure it’s an E number but it’s also essential for my glass of sauv blanc not to taste like cat wee.

Getting kids into curry - Indian recipes for young people