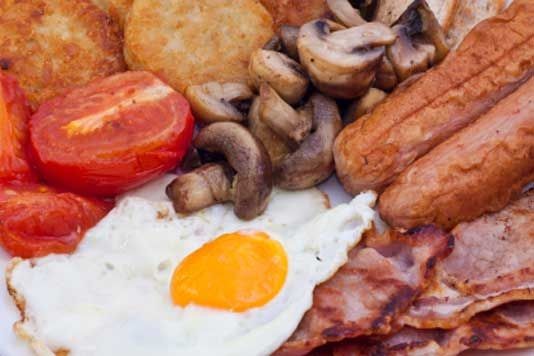 204 countries are competing in the Olympics, and each nation will be kick-starting their training days with a very different breakfast. Here are a few of our favourite examples, and how many calories each one knocks up.

Each breakfast has been assessed for calories and fat content by expert in nutrition and wellbeing Jennifer Irvine, who launched The Pure Package diet in 2003.

It’s got to be the Full English or Scottish or Welsh. In fact, the London Organising Committee of the Olympic Games (LOCOG) recognised the right for Little Chef to continue to use the ‘Olympic’ name in conjunction with its iconic and best-selling ‘Olympic Breakfast’: two eggs, two rashers of bacon, British pork sausage, mushrooms, sauté potatoes, griddle tomato, Heinz baked beans and toast or fried bread.

However, a 2011 survey revealed that porridge is gaining in popularity, and eight out of 10 people in the UK start the day with toast accompanied by the iconic cuppa.

Two slices of white toast with honey and a cup of tea with milk: 209 calories and 1.3g saturated fat

In Spain ‘el desayuno’ is by far the smallest meal of the day. As Spaniards typically eat a large lunch, a traditional breakfast may be little more than a café con leche (similar to a Latte) accompanied by deep fried, doughnut-like churros or small, sweet cakes called magdelenas. It’s also not uncommon to see Spanish people eating toast with a small amount of soft cheese or ham.

In Russia many people start the day with ‘syrniki’, which are a simple type of pancake made by frying beaten eggs, sugar and flour with cottage cheese. A breakfasting Russian may enjoy two to three of these served with sour cream and washed down with sweet black tea similar to that popular in Turkey.

Similarly to their Spanish cousins, the Greeks see breakfast as the lesser of their daily meals. With a late lunch and dinner usually not eaten until well after 9pm, many simply make do with a cup of tea or coffee. Those wanting to start the day the right way might eat some fresh bread alongside some feta cheese and olives. A popular breakfast drink is black tea sweetened with honey.

Bread, feta and olives and a cup of black tea with honey: 462 calories and 5.9g saturated fat

This was one of the few breakfasts that Jennifer gave the all clear: “I would be perfectly happy with this! It will not only give you an energy boost to start the day, but by eating a balanced breakfast (such as this) you may notice other health benefits such as weight control and improved mental performance.”

Western-style breakfasts including eggs, pastries, cold meats, yoghurts and cereals are becoming more popular in Croatia, but a more traditional morning might consist of just a glass of rakija (fruit brandy), a cup of coffee and a bread roll hot from the local bakery. There is a tradition for Croatian people to have “gablec”, which literally means ‘breakfast eaten with cutlery’. This custom dates back to the former Yugoslavia, where people started work or school very early and had no time for breakfast. Eaten mid-morning, “gablec” may consist of a dish called sarm (cabbage stuffed with meat and vegetables) or goulash.

Sarm and a glass of rakija: 407 calories and 6.6g saturated fat

And to leave the most impressive until last… 27-year-old American swimmer Michael Phelps partly has his 12,000 calories a day diet to thank for winning 16 Olympic medals. He starts the day with a whopping three fried-egg sandwiches, three chocolate chip pancakes, a five-egg omelette, three sugar-coated slices of French toast, AND a bowl of grits (maize porridge)! Then it’s a kilo of pasta, sandwiches, pizza, and gallons of energy drinks for the rest of the day.

But we’re sure that’s not typical of most Americans.

What do you have for breakfast? And how much would you eat in the morning if you were an Olympic hopeful in training? Talk to us in the comments box below…

Breakfast cereals are full of sugar, says Which?