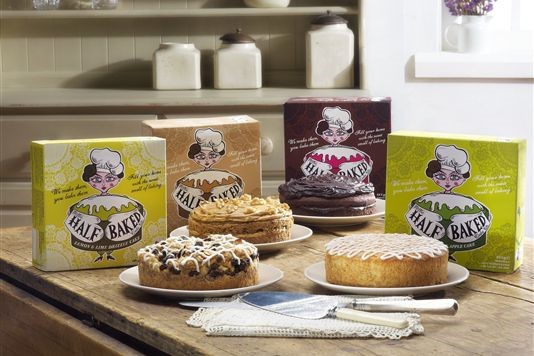 Can our own Charlotte Morgan make a coffee and walnut cake better than Waitrose can? And better than expensive ready-made cake batter can? Find out.

Baking barmy, that’s me. It is only for the love of cake that I get up at 6am on a Sunday to sell my wares at the St Albans Farmers’ Market. Naturally, I think home-baked tastes best; so when I got a press release through from The Half-Baked Cake Company, claiming that their shove-it-in-the-oven cake mix tastes better than homemade cake, I felt a challenge a-brewing.

The challenge: bake a coffee and walnut cake from scratch, to my own recipe, in the brand new lovefood HQ kitchen, then set it against a cake of the same flavour from Waitrose (I snobbishly assumed that theirs would be the best), and one more from The Half-Baked Cake Company.

The cakes were chopped up into same-size chunks, and laid out on three separate plates. Tea and coffee was available for those tasters who needed it (there were 12 volunteers in total), and the aim was to find out a) which cake tasted best, and b) if people could tell which one was homemade.

In the red corner - Coffee and walnut round cake, by Waitrose.

RRP £2.29. ‘Aromatic and nutty,’ according to the box. Recommended by 10 out of 13 customers on the ocado website.

In the blue corner – Coffee and walnut cake, by The Half-Baked Cake Company.

RRP £5.00. An unbaked wet cake mixture which comes in a greaseproof paper mould, and is accompanied by toppings for the baked cake (coffee butter cream and walnuts). They use free-range eggs, real butter and proper patisserie flour, and all you need do is shove the whole thing in the oven for 50 minutes. Squeeze the icing out of the bag provided, and sprinkle the walnuts on top.

In the, ummm, yellow corner – homemade coffee and walnut sandwich sponge, by me.

RRP about £1.75 (I have a special Farmers’ Market spreadsheet, which works such things out). This is a secret recipe which I’ve been baking for years (I've uploaded the recipe for you all to try here), made out of two sponges sandwiched together with coffee butter cream. Takes 35 minutes in the oven.

Each cake was marked out of 10, and everyone specified their overall favourite at the end. Of those 12, nine guessed which cake was homemade correctly. But who won the flavour test? Starting with the least popular…

Nobody picked this as their favourite, and only one person failed to guess that it was the shop-bought option. It got 71 points out of a possible 120 (59%) and comments varied from “good flavour but slightly dense,” to “overly sweet”, “too dry”, and “artificial flavour”.

A sterling effort by the Half-Baked Company, who scored 93.5/120 (78%). Indeed, five people chose this cake as their favourite, and flattering comments included “icing is very smooth”, “lovely strong coffee flavour”, and “good consistency”. But for some the “sponge was a little too dry”, and others found it “far too sweet”.

I’d like to thank my mum, my guinea pig… no, no; in all seriousness, it was a close one. Seven out of 12 people chose mine as their favourite, and it scored 101.5/120 in total – that’s 85%. Compliments included “lovely moist consistency”, “chunky walnut pieces”, “soft and moderate sweetness”, and “very light and fluffy – I could eat loads!” The only complaint was that the coffee flavour was too weak; although News Editor Simon Ward described it as a “subtle but still discernible coffee flavour”. Thanks Simon! [Simon: I should add that I don't like strong coffee, so less is definitely more for me]

What have we learnt?

Home-baked tastes best! I am, however, surprised at how well the Half-Baked cake performed… and I suppose if you were in an almighty rush, it could be a good option. But it did cost nearly three times as much to make (despite being much smaller); took longer in the oven (50 minutes, compared to 35 minutes and 10 minutes prep time for mine); had a longer list of ingredients; and didn't give the same fresh-out-the-oven golden hue (as you can see in the picture above, where my cake is in the foreground).

As for shop-bought cakes, I’m afraid I have nothing positive to say about them. They cost more, taste worse, have a never-ending list of bizarre ingredients, and are usually much smaller, too.

What do you think? Do you agree with me, or can you argue in favour of shop-bought cakes? Tell us in the Comments box below.