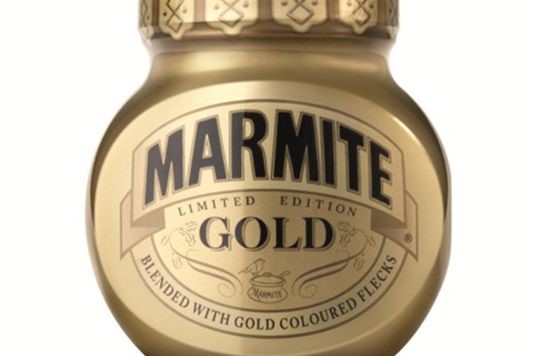 It's not just our postboxes that have gone gold. now Marmite is in on the act, with a shiny new limited edition jar.

Marmite Gold: the first ever version of the yeasty spread which actually changes the colour of the Marmite inside. It’s flecked with little gold specks – not edible gold leaf; just gold colouring I’m afraid – and tastes exactly the same, according to my palate. The gold jar itself is super swish, and apt too given our recent Olympic and Paralympic success.

I went crazy for Marmite Gold as soon as the pretty jar arrived at lovefood HQ. I can’t get enough of the salty, spicy, gooey goodness, and think it deserves to sparkle. Toasted brown bread slathered in butter and shiny Marmite? That may well be my favourite food ever. Perhaps it's because Marmite was what I had when I was young and feeling poorly, as this feature on 'poorly' food explains.

Lovefood.com editor Andrew, on the other hand, loathes the stuff. More fool him, for what else is one supposed to spread on one’s toast when one’s in a savoury mood? Peanut butter is too sickly, jam is too sweet, honey is too runny… and none of them taste good with butter, like marmite does. That oozing, warm buttery Marmite melt is worth waking up for, every time. My stomach literally just grumbled as I wrote that. (Mine just retched! -Ed.)

What other people said

I put a photo of the golden Marmite jar on Facebook, asking if our friends would give it a go (the £3.99 250g jar goes on sale in various supermarkets nationwide, starting from 9th September). The reaction was varied, to say the least: Janina Craske would love to try it; Nigel Tabb said he was looking forward to “blinged-up toast, innit”; Mark Stynes thinks it’s “completely pointless”. Meanwhile, Philip Brocklehurst thinks it’s “stupid”; Sue Cooke thinks it will still be “just as yucky”; and Kerry James says “OMG loves it! Gold on me toast”.

And a quick poll of the office gave eight 'love it' and eight 'hate it' responses... and two who could 'take it or leave it', which I found most perplexing.

Clearly, then, the whole ‘love it or hate it’ marketing magic is still going strong. What other foods, I wonder, have that same quality? Perhaps white chocolate…. foodies won’t touch it with a barge pole, given its lack of cocoa, but what about the delights of Milkybar? Julia Childs famously hated coriander (I don’t like it either), but many would pick it as their favourite herb. Just the smell of anchovies is enough to make some feel nauseous, whereas others think it the highlight of a Caesar salad; liquorice is most certainly an acquired taste; and beetroot is sure to divide opinion at the dinner table.

Can you think of any other love-it-or-hate-it foods? And what do you think about the new gold Marmite? Tell us in the Comments box below…