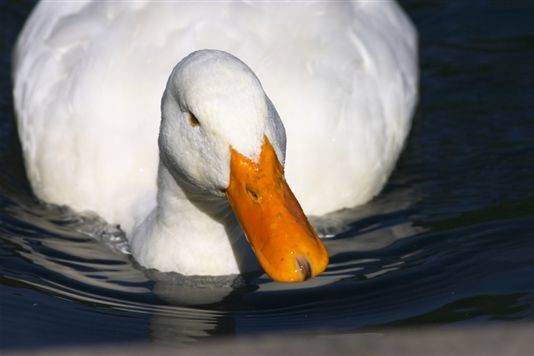 Welfare has taken a backward step for UK ducks, and the RSPCA is determined to do something about it.

No windows, baths, bedding or beaks

Millions of ducks farmed for meat in this country are reared without bathing water – a sad fact which eight out of ten people think should be illegal, according to a RSPCA survey conducted by YouGov.

By law, ducks can be reared in sheds with no windows; bathing water is not a necessity; beaks can be trimmed; they don’t have to be provided with bedding; and a metal ball bearing-type water drinker, similar to that you’d give to your pet hamster, is enough when it comes to giving them water (as shown in the photo).

RSPCA standards, on the other hand, insist on bathing water as well as bedding and natural daylight. Of the 14.7 million ducks farmed in the UK last year, only a third of them were looked after to RSPCA standards – a steep decline since 2010, when 50% of ducks were RSPCA farmed.

One of the reasons why duck welfare has nosedived over the past two years is because one major duck producer and several supermarkets have downgraded from RSPCA welfare standards to join the ‘Duck Assurance Scheme’ (DAS), which was set up by the duck industry and doesn’t require the birds to have natural daylight or bathing water. The RSPCA protects ducks by more than 400 welfare standards from hatching to slaughter – almost double the number of DAS standards.

If you can bear to watch it, here's an undercover video of a non-RSPCA duck farm in the UK, which stresses how important it is for ducks to be in water:

This month the RSPCA launched the ‘Like a duck to water’ campaign, aiming to improve conditions for Britain’s forgotten farm animal. They are encouraging consumers to boycott non-RSPCA standard duck, and urge supermarkets to only stock duck which has had access to bathing water. Indeed, the survey revealed that just over 80% of people already think that supermarkets shouldn’t sell duck that has been raised out of water.

Dr Marc Cooper, duck welfare expert from the RSPCA's farm animal science team, said: "Ducks are waterfowl, they need bathing water, why else would they have webbed feet?”

“Bathing water is good for ducks’ health – it helps keep their eyes, nostrils and feathers clean. And in the same way that pigs like to root and chickens like to dust bathe, ducks like to have bathing water so they can do all the things ducks naturally do.”

Do you care about the ducks?

Unfortunately, the survey found that ducks are joint bottom (with turkeys) in the list of farm animals which the public are most concerned about. But now that you know all about their plight, you can make sure that you buy higher welfare duck meat by looking for the blue and white Freedom Food logo (pictured left), which means the bird came from a farm inspected to the RSPCA's strict welfare standards. Freedom Food labelled duck is on sale at some branches of Sainsbury’s.

The RSPCA has produced an animated film, ‘Uncomfortable Tails’, about the plight of Jennifer the Pekin duck. You can view the video here.

Compassion in World Farming, which believes that animals should not be reared in factory farms, has also highlighted the poor treatment of farmed ducks, and last year carried a story about how ducks were being mistreated on a free range farm in terms of how they were caught.

Catchers at Hall Farm in Norfolk, which used to supply Waitrose with free range ducks, were covertly filmed by Hillside Animal Sanctuary grossly mistreating the ducks. The footage was sent to Sky News and, if you’re brave enough, you can view it here. Waitrose immediately suspended the supplier.

Do you check the welfare standards of the duck you buy? And how acceptable is it to eat something raised in such conditions? Talk to us in the comments section below.

The rise of locally-sourced meat

How to keep chickens