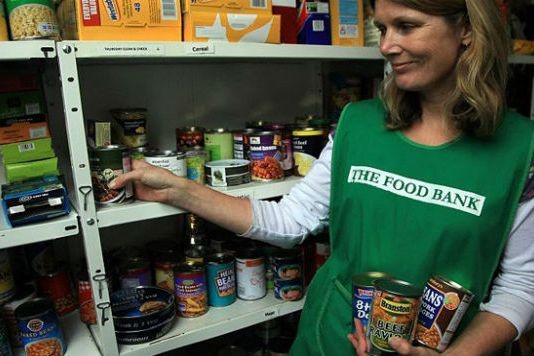 The tough economic climate means more and more people are struggling to afford food. But help is at hand.

There have been many shocking statistics since the economic downturn hit. Perhaps one of the most striking is that one in six parents on low incomes have skipped a meal, often their evening meal, to ensure their children can eat.

This has been paralleled by a huge growth in the number of food banks around the UK. Food Banks are non-profit organisations that aim to help people who have hit hard times by providing them with a three-day emergency supply of non-perishable food.

The Trussell Trust, a Christian charity that “works to empower local communities to combat poverty and exclusion” and is the umbrella organisation for many of the current food banks, predicts that 500,000 people will need their help by 2015. It says that it helped almost 110,000 people between April and October this year, compared with 128,000 over the whole of last year.

Back in April, I went to the launch of Haywards Heath’s food bank, which is housed in a building next to the town’s Baptist church. This branch is affiliated to the Trussell Trust, although its volunteers come from all sorts of backgrounds and many are not religious.

During her speech to the assembled dignitaries and volunteers, the foodbank’s co-ordinator Fi McLachlan stressed that, even in a supposedly affluent area, “there is food poverty behind closed doors”.

The organisers highlighted that they had consulted with many of the town’s care and voluntary bodies to establish that there was a genuine need for a foodbank before they got started. What they heard made them even more determined to get it off the ground. People quickly signed up to be volunteers and the ball was well and truly rolling.

The wider public also responded very positively – an appeal for donations at the local branch of Sainsbury’s led to two and a half tonnes of food.

Now, food will be distributed to people who are referred to the foodbank by agencies such as Jobcentre Plus, Citizens Advice or doctors and social workers.

During the launch meeting, we also heard from Daniel, a former drug addict who was helped by the Worthing foodbank and now volunteers there.

It can be easy to dismiss food poverty as something that only happens somewhere else, but chances are people are struggling to eat not far from where you are now.

How you can help

Look out for food bank collections in your local supermarket, bank or shops. You'll be given a shopping list and asked to buy one item off that list. Or donate directly to a food bank in your area.

To find your nearest Trussell Trust food bank, go to the organisation's website.

Photo courtesy of the Trussell Trust

This article has been updated from an earlier version

How to save money on food

How you can help provide Christmas dinner to those in need

Four family main meals for under £3

How you can help food waste charities