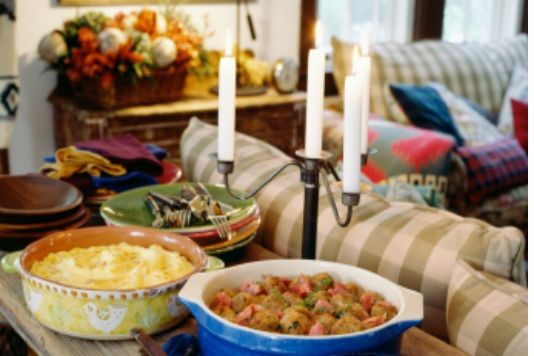 It was big in the 50s and 60s but cooking at home for groups of friends, neighbours and strangers has made a comeback.

The past few years have seen a number of food revivals – offal, gleaning, baking. And you can add the safari supper to that list now.

Safari suppers were popular during the 1950s and 60s but then died something of a death. The success of TV show Come Dine With Me has almost certainly played a part in this renaissance.

The revival seems to have happened in two very different ways: in rural areas as a charity fundraiser, and in cities as a way for young, career-focused singletons to meet new people.

Having not been a young singleton for a while, I signed my wife and I up for a rural fundraiser.

A safari supper is a complex beast to organise and the rules can vary according to who’s organising it.

The way it worked on my evening was that all the participants gathered first at a house for a pre-dinner drink. Envelopes were then dished out, giving each pair the address where their starter course would be served.

After the starter (baked camembert with a cranberry sauce accompaniment, in case you’re wondering), envelopes were then dished out with the location of the main course.

Now this is where it gets complicated for the organisers, as the ultimate aim is for no two pairs to eat more than one course together, so you eat with a new batch of people each time.

As it turns out, we were on main course duty (a beautifully tender slow-cooked beef casserole courtesy of my wife, no bias at all) so we had to dash off to get our house ready.

Following the main, you’ve probably guessed that it’s envelope time again and on to dessert (an extraordinarly lavish spread of apple pie, cheesecake, chocolate mousse and cheese). Finally, everyone reconvenes at a fifth location for coffee. All that for £10 a head – bargain! And I met some very interesting new people.

Here’s what a safari supper looks like in diagrammatic form:

I spoke to Lesley, one of the organisers, and she told me that not only did they try to ensure no two pairs sat together on one night, but they also tried to separate people who had been sat together on the last supper evening. Now that’s organisation…

Several companies now organise safari suppers for young singletons. Safari Supper Club, based in South-West London, offers the chance to “spend the evening with your mates but also meet new people in an environment that isn’t the same pub/bar as usual”.

Their concept is slightly different. They take six groups of four people: three male and three female. The three male groups all prepare a three-course meal at someone’s house. The female groups move around the three houses, having a different course at each house.

Safari Supper Club organises the taxis for the ladies and at the end of the night everyone meets up at a club for drinking, dancing and who knows what else…

A great way to eat out for less

I have to confess I had some misgivings about how good an evening I would have, but I was proved utterly wrong on all counts. The food was fantastic and everyone had clearly gone the extra mile to cook up something special. The wine choices were also very good and there was a real sense of community and camaraderie around the tables. It was also extraordinarily good value. I’ve signed up for the next one already.

Top tips for hosting a course

If you're hosting a course, you really need to have something prepared in advance; either a cold dish or something you can warm in the oven. You're on a fairly tight schedule so cooking for even 20 minutes isn't really an option. For some inspiration, take a look at our quick dinner party menus article.

Have you been on or organised a safari supper? If you haven't, would you go on one now? Let us know in the Comments section below.

How to cook for large numbers in a small kitchen

How to host an Indian dinner party