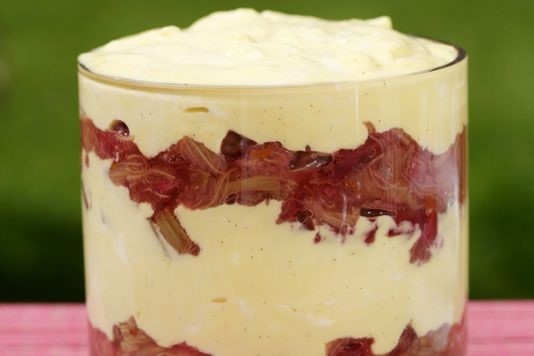 Glyn Hughes looks at the more than slightly mad story of the nice dessert with the silly name.

A fool is a daft 'apeth, a jester, a clown. So why on earth do we have a creamy dessert called a fool? I'll get to that, but first: what is a fool? I mean the one with the fruit, not the one with bells.

What's in a name

The name 'foole' goes back to the time of the 'Merry Monarch' King Charles II, with a recipe in a book called The Complete Cook. It was written by someone who, unlike all the celebrity chefs before or since, didn't seem to want anyone to find out his real name, and who we only know as the enigmatic 'Mr WM'.

Apart from the fact that you must prepare it 'in a silver pot', Mr WM's Gooseberry Fool is pretty much the same as the one 250 years later in the Victorian The Art of Cookery Made Easy and Refined by John Mollard. His recipe goes as follows:

That's the classic Goosberry Fool, as limericked by Edward Lear, but it isn't by any means the only fool in the kitchen.

The Norfolk Fool was an early type of bread and butter pudding which goes back to the 17th century. It's made with creamy custard, dates and spices (mace and whole cinamon). A recipe appears in The Accomplisht Cook by Robert May, published in 1660.

Boodle's Fool is named after the private members' club of the same name. Famous for its cooking, the club was the haunt of the dandy Beau Brummel, and the likes of Winston Churchill. The recipe calls for a dish, partly lined with plain cake slices, filled up with cream whipped with orange, lemon and sugar, and decorated with orange slices.

This one is an early form of trifle. A sweet custard with rose, mace and nutmeg favours, poured over "a penny loaf cut into six slices", soaked in sack, or sherry. "Let it stand till it is cold, and serve it up," says the famous Hannah Glasse in her The Art of Cookery, Made Plain and Easy of 1747.

So where does this name 'fool' come from? It's actually very simple - that sweet thing you have at the end of a meal is just a small, unimportant, trivial tit-bit, isn't it? So it's called a 'trifle', or a 'fool', or another name once used was a 'whim-wham' – biscuits soaked in sherry, we think, which also meant a 'little thing'.

If you want to be even sillier, well, there is a type of gooseberry called 'Careless'. A Careless Fool would be a real treat, and surely daft enough for anyone.

Some more foolish things for you to trifle with: