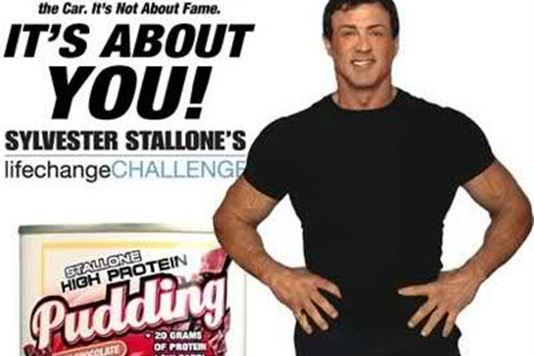 Have you ever tried Sylvester Stallone’s protein pudding? Or Hulk Hogan’s cheeseburger? We’ve trawled the internet to find the five most bizarre celebrity-endorsed food products.

Pineapple, lemon, strawberry or orange… which is your favourite Heidi Klum Fruit Flirtation flavour? The supermodel launched her fat-free ‘healthy candies’ in 2006, duly plonking her face on the front of every packet. She kept quiet about the 31g of carbohydrate per Fruit Flirtations serving though, and happily munched away on them for the cameras. Funny that Fruit Flirtations don't make it on to Heidi's favourite healthy snacks list...

Sylvester Stallone’s ‘Instone’ canned dessert (which comes in milk chocolate or vanilla crème flavour) was ‘the world’s first ready-to-eat high protein pudding’, according to supplementstogo.com. It’s supposed to be a healthy, satisfying and guilt-free snack, with a Rocky-esque 20g of protein per serving – that’s three to five times more than other high protein puds on the market. But there’s a whole load of dodgy history to the pudding, and no-one knows who came up with the idea first…

Wrestling champ Hulk Hogan kicked his food career off in 1995 by opening the ‘Pastamania’ restaurant in Minnesota. It featured such delicacies as ‘Hulk-U’s’ and ‘Hulk-A-Roos’ and lasted less than a year. Ever determined, Hulk turned his attention to a line of microwavable ‘Hulkster burgers’, including hamburgers, cheeseburgers and chicken sandwiches, which were sold at Wal-Mart. This Hulk fan was not entirely pleased with the product.

True to his name, US rapper Snoop Dogg signed a deal in 2003 to launch his own brand of foot-long hot dogs in America, which might soon end up over here too. “There aren’t any celebrity hot dogs out there,” Snopp’s brother and business manager Bing Worthington reportedly said at the time. “Imagine a long, skinny hot dog just like Snoop,” he added. Apparently the star also has plans for ‘Snoop’s Scoops’ ice cream, according to The Sun. 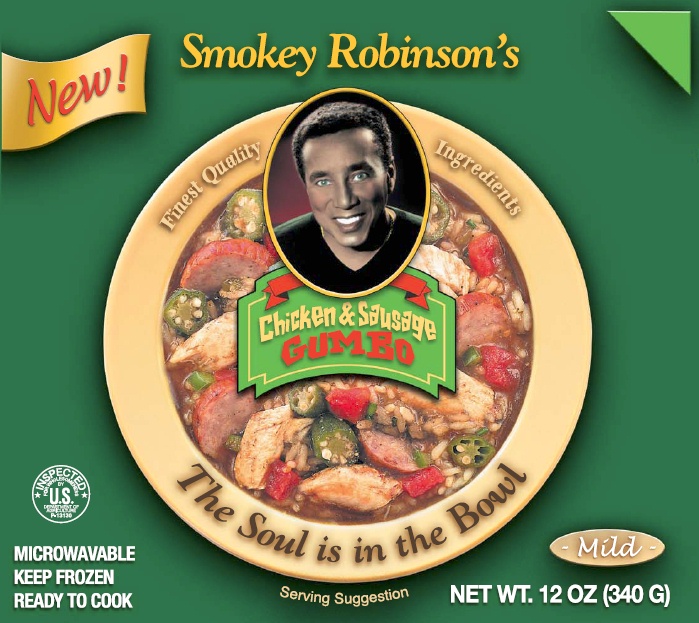 American R&B singer-songwriter Smokey Robinson has a suitably authentic-sounding name for a career in the food biz. Perhaps that’s why he set up his own food company (SFGL Foods) and launched a frozen gumbo brand called ‘Smokey Robinson’s The Soul is in the Bowl’ in 2004. “The gumbo is a gift from God,” he said in an interview with the Los Angeles Daily News. You can also buy Smokey red beans and rice, and jambalaya.

As for the booze…

Celebs love making their own tipples. Cliff Richard’s Vida Nova wine, produced in his own Portuguese vineyard, holds Tesco’s record for being the fastest-selling bottle in the supermarket’s history. Meanwhile, Drew Barrymore created a Pinot Grigio in honour of her family; Danny DeVito’s Limoncello gets great reviews; and even AC/DC lend their name to a ‘Back in Black’ Shiraz and a ‘Hells Bells’ Sauvignon Blanc.

Yes they’re a good giggle, but is it irresponsible for celebs to be endorsing snacks, booze and microwavable meals? A study by The University of Liverpool found that the practise ‘encourages children to eat more of the endorsed product’, and cited Gary Lineker and his Walkers Crisps ads as an example.

Dr Emma Boyland from the Institute of Psychology, Health and Society, which led the experiment, said: “This research has consequences for the use of celebrities, and in particular sports stars, in advertising unhealthy or High Fat Salt and Sugar (HFSS) products. If celebrity endorsement of HFSS products continues… then this would mean that the more prominent the celebrity, the more detrimental the effects on children’s diets.”

On the other hand, there is such a thing as a responsible celebrity. The late American actor Paul Newman, for example, set up Newman’s Own in 1982, filling bottles with his homemade salad dressing and giving them to neighbours as holiday gifts. Their popularity led to the expansion of the business, which has always pledged 100% of its profits to charity. The company has now donated over $370 million worldwide in just over 30 years.

Have you ever tried a celebrity-endorsed food or drink product? Do you think it’s a good idea? Talk to us in the Comments box below.

How celebrity chefs have changed what we eat

Learn the secrets of celebrity chefs

How Sooty made me eat my veg