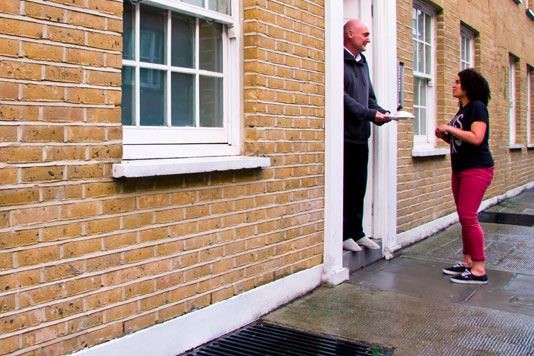 Casserole Club connects cooks with spare portions to those in their community who might not be able to cook for themselves.

Meals on Wheels, the service that delivers meals to people at home who are unable to prepare their own food, has been going in the UK since 1943. Back then, many of the early services used old prams to transport the meals, using straw bales – and even old felt hats – to keep the meals warm in transit. Technology has moved on quite a bit since then, so what would it look like if the social media generation got involved?

Step forward Casserole Club, a new project that helps people share extra portions of home-cooked food with others in their area who might not always be able to cook for themselves. Like a local, community-led takeaway, Casserole Club members serve up meals to their neighbours, getting more people eating and cooking fresh while strengthening local neighbourhood relationships with every bite. For those who aren’t on the internet, Casserole Club helps those who are offline to order meals, connect and pair up with local people.

Casserole Club was started by FutureGov, a public service innovation and design agency. As Matt Skinner, who leads Casserole Club for FutureGov, explains: "We saw that while people might have great circles of friends, school or other networks, they didn’t necessarily know the people living right on their doorstep. With this in mind, Casserole Club was born out of a desire to help bring communities together with the realisation that there are a lot of people cooking up food, and many others who would greatly appreciate a home-cooked meal."

FutureGov won some funding to develop the Casserole Club idea from Nesta, the Design Council and the Technology Strategy Board. Thanks to some existing work FutureGov was doing within Surrey County Council, the project found a first home in Reigate and Banstead. "From that point forward, we have spent our time researching, piloting, building connections within the community, and developing Casserole into what it is today," said Kat Segal, Lead Organiser of Casserole Club. "The scheme has now rolled out to Tower Hamlets and Barnet, with more on the way.

"Eventually, we do want to spread Casserole as far and wide as we can, but given our current resources, we want to make sure that everyone gets the attention and support they need, so we’re starting small and growing naturally."

And the older people who receive meals give something back too, as they get to connect to their neighbours. Take Casserole Club diner Manny, who was raving about her cook Erica: "It was a delicious sweet potato curry and we had a very interesting chat". Casserole diners love that they can also give something back to their cooks, like sharing stories over food.

There are other similar projects connecting the younger generation to older neighbours through technology. For example, Alive! is using iPads to connect older people with their families and combat loneliness. There are also initiatives similar to Casserole Club in the US, such as Share My Meal, although that platform is more peer-to-peer cooking for people who don't feel like cooking, rather than from a social need.

Casserole Club is currently looking for cooks who live in Tower Hamlets and Barnet to sign up to the service. Wherever you live, if you are interested in the project and want to hear when it reaches your area, sign up now at casseroleclub.com

Would you cook an extra portion of your dinner for an older neighbour? Let us know in the Comments section below.

Living below the line on £1 a day

Why buying Fairtrade food can help save the world