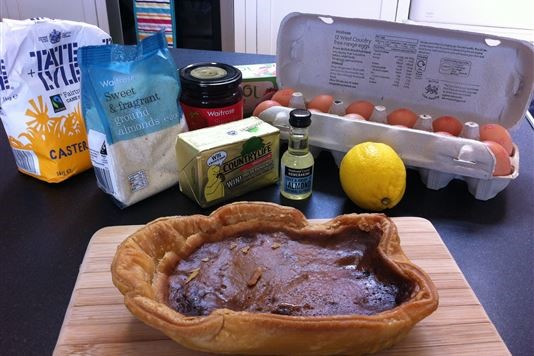 It’s her favourite dessert in the world – but can lovefood’s Charlotte recreate a Bakewell Pudding at home, with only a frustratingly vague recipe for guidance?

To visit Derbyshire’s Bakewell without trying their famous Bakewell Pudding would be like forgetting a stick of rock from Brighton, a Fat Rascal from Harrogate, or a bar of mint cake from Kendal. Swarms of tourists descend on the picturesque town every weekend, their radars set for one of three shops that all claim to sell ‘the original Bakewell Pudding’.

Don’t get confused – ‘Bakewell Pudding’ is only a very distant, far-removed cousin from the glacé cherry-topped ‘Bakewell Tart’ championed by Mr Kipling, among others. Their appearances are incomparable for a start; the ‘pudding’ is by far the ugliest of the two, and I remember feeling disappointed when I first saw that solid oval of pastry, filled with a murky pool of brown goo.

But I learned my lesson (never judge anything by its cover) when I bit into a Bakewell Pudding for the first time one cold winter’s night, two years ago. The gelatinous middle – balanced on a base layer of jam and made from an eggy almond mix – literally oozed fat when cut with a fork, and my teeth stung with the pudding’s ludicrous sweetness.

It was glorious, relentless, and the perfect pudding for a glutton like me. Julie Hurst, manager at The Old Original Bakewell Pudding Shop, which once sold a record 11,000 puddings in just one week, agrees: “Oh I absolutely love it too. It’s the unique texture that does it for me, and that eggy almond taste. If you’ve a sweet tooth, you’ll never tire of Bakewell Pudding.”

On top of the taste, Bakewell Pudding also boasts a charming history, with most claiming that it was originally made by accident at a local inn around 1860. Mistress of The White Horse, Mrs Graves, instructed her cook to bake a strawberry tart for some guests; but instead of stirring the egg mixture into the pastry, cook accidentally spread it on top of the jam instead. The surprisingly delicious result was declared a triumph, and Bakewell resident Mrs Wilson, the entrepreneurial wife of a tallow chandler, or “the Alan Sugar of her day” as Julie calls her, obtained the recipe and began selling the puddings from her cottage [pictured above left].

But the often-told legend ignores the fact that recipes for the dish had already been published by the 1830s (there was even one in America’s ‘The Family Magazine’, dated 1837), and that the White Horse was probably demolished sometime around 1803. Oh well, it’s a nice story. What we do know for sure is that the official Bakewell-Pudding-from-Bakewell recipe has never been released, and the town still remains jealously protective of it. “We use the same recipe that Bakewell’s cooks used over 150 years ago, and that’s a special thing,” said Julie. “So under no circumstances will I be telling you the secret ingredient!”

Making my own Bakewell Pudding

Whenever a recipe is ‘secret’, I can’t help but try and crack it. Not one of the three pudding shops in Bakewell is prepared to share everything, although The Old Original Bakewell Pudding Shop does tease visitors by selling a tea towel with the core ingredients (with just ‘a secret pinch of…?’ to decode) on it. 7.5 oz puff pastry, 4 tbsp homemade jam, 4 oz caster sugar, 2 oz unsalted butter, three eggs, almond essence and 2 oz ground almonds – that was all I had to go on, when I attempted to make my favourite dessert back home in the lovefood studio kitchen.

A quick Google gave scant recipes for proper Bakewell Pudding (most of them look more like cakes), so I found no help online. The Hairy Bikers seem to have the right idea – they stick to puff pastry and leave out the flour – and so I, like them, decided to cream my butter and sugar together, before adding the eggs (the basic beginnings for any cake mixture). Then in went the ground almonds and almond extract, and after a quick beating I had a yellow semolina-esque mixture. Into an un-cooked puff pastry case (lined with a thin layer of sieved strawberry jam) I poured this concoction, before baking for 35 minutes [pictured above left], as The Hairy Bikers suggest. The result was a soggy bottom, and a molten pool of jammy mess.

Quite clearly, I should have pre-cooked my pastry bottom. So that is what I did second time round. I also used less jam and added a dash of lemon juice to the eggy mix, because I detected a touch of citrus in the official pudding that I brought back to London with me. Perhaps lemon is ‘the secret ingredient’?

The result certainly looked similar, and I was full of high hopes. But upon slicing, the insides were far too cakey to be Bakewell Pudding – what I needed was a gelatinous, wobbly and somewhat unappealing grey-brown centre [mine is on the left in the picture]. A couple of colleagues taste-tested my attempt against the official Bakewell Pudding: “Yours tastes more like a Bakewell tart,” said Rebecca; “I actually prefer yours – but it doesn’t taste anything like it’s supposed to,” said Emma. Back to the drawing board.

Surveying my tray of ingredients, I realised that there was no way I’d get a wobble with the ‘creaming’ method. What I needed was more of a custard, or a crème patisserie – and they usually involve egg yolks, as opposed to whites. Plus would it help if I melted the butter first, and then incorporated it into the mix with a whisk?

A Google of ‘bakewell pudding egg yolk melted butter’ generated this fantastic blog post by a food historian, who had uncovered some pre-Mrs Graves Bakewell Pudding recipes. One found in Meg Dod’s The Cook and Housewife’s Manual (1826), for example, called for ‘a custard of five beat eggs, five ounces of melted fresh butter, six of pounded loaf-sugar, and three tablespoons of lemon brandy’. Another, written by Clara Palmer-Morewood of Alfreton Hall, Derbyshrie in 1837, is remarkably similar, but gives slighter smaller quantities.

Armed with this newfound knowledge, and despite the fact that Julie told me “we don’t use melted butter here”, my next pudding was a hand-whisked mix of 4 oz melted butter; 4 oz caster sugar; one egg white; four egg yolks; 0.5 oz ground almonds; and a dash of lemon juice. It was canary yellow and had the consistency of thin custard. Into the jammy puff pastry case it went. An hour or so later, and after leaving the pudding to cool with the oven door open upon Julie’s advice, it looked a good match for the original.

This time, we tasted it warm. I cut it open and the puddings still looked roughly the same, although mine was far brighter in colour (too many egg yolks, perhaps?) As for the taste… well, it wasn’t similar enough for a perfectionist like me. “Yours isn’t half as sweet as the original pudding,” said Andrew; “I prefer yours – it looks fresher, and you can taste the almonds better. I think there’s too much jam in the other one,” said Simon. Personally, I still prefer the authentic Bakewell Pudding.

Mine [pictured on the bottom here] just didn’t secrete saturated fat like it should have done, nor did it make my teeth tingle. If I had the time, and an endless supply of ingredients, I’d try adding more sugar and jam, but take away a bit of egg – perhaps 4 oz melted butter; 6 oz caster sugar; two eggs; one egg yolk; 0.5 oz ground almonds; and a dash of lemon juice.

But the very brilliance of famous, old-fashioned puddings lies in the fact that the esteemed recipe is handed down the generations, and inevitably changed along the way. So perhaps my canary yellow pudding will be what it does look like, sometime in the future… but for now, Bakewell can rest easy in the knowledge that its recipe remains a secret.

Have you ever tried to make your own Bakewell Pudding? Or attempted to crack a different kind of ‘secret recipe’? We’d love to hear your stories, so talk to us in the Comments box below.