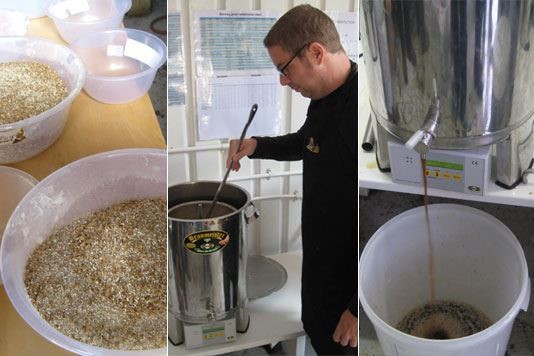 In an old railway arch in south London, Simon Ward mashed-up his own unique beer.

Is there a better way for two gentlemen of a certain age to spend a Saturday afternoon than by taking part in a beer making workshop? And so my drinking buddy Dom and I signed up for some liquid science at the London Beer Lab, cited in a railway arch a yam's throw from Brixton tube station.

The chaps behind it have all left other careers behind to pursue the dream of brewing and teaching other people to brew. This time around, as well as us, they were imparting their knowledge to two couples: one on a dream date for the gent, the other landlords of a pub in Central London wanting to understand more about the nuts 'n' bolts of how beer is made.

The first, and biggest, decision of the day was what beer to make. The couples both plumped for American Pale Ale, very much the flavour of the month in the burgeoning 'craft beer' scene (of which the Beer Lab is indisputably a part). Me? I wanted something a bit more traditional with a twist. So after reining Dom back from a stout, we picked a porter.

However, I also wanted something with a bit of food content, namely a more chocolatey flavouring.

So we went for some chocolate malt, which isn't nearly as tasty in its raw state as it sounds; in fact it's more burnt toast than smooth cocoa.

With the malts selected and all mixed up with some water, it was time to boil them up to release their sugars and get our base flavour. This is the longest slog of beer making. Still, it gave us plenty of time to pick our hops to provide the bitterness, aroma and taste, and for brewmaster Bruno to talk us fully through the brewing process.

A masterstroke or a huge mistake?

After sniffing various hop varieties (our porter recipe already called for Chinook hops), we were presented with some Citra hops, which smell exactly how their name suggests, and gave me an idea. What about making a beer version of chocolate orange?

Rather conveniently, there was some dried orange peel available too and other ingredients ranging from coriander to Irish moss (seaweed).

Now, in sober hindsight, veering towards an intense range of flavourings may not have been such a good thing. We held back from adding Grains of Paradise (which were used as a substitute for pepper centuries ago) but we duly ground up some coriander.

And a few samples of the Beer Lab's own creations later, we were far more confident we were onto a winner.

While this was going on, it was also time to activate the special ale yeast we were going to add later, which basically involved popping a sealed pouch.

After the boiling stage, which is completed in temperature-controlled phases in the lab's very fancy German vessels, the mashed grain (the mash) is then rinsed (a process known as sparging) and the liquid or wort that's been produced is ready for some more flavour.

The hops enter at various points, depending on how much bitterness, aroma and taste you want. We aimed for quite a nose and mouthful, working on the premise that it might smell good even if it didn't taste that great, and vice versa.

Once the hops and flavours had been boiled in and then removed, the wort was then cooled. Then it was time to get sterile as the strained wort was poured into a fermentation bucket.

We took a sample and tested it with a hydrometer to record the original gravity, which allows us to calculate the alcohol by volume after fermentation. We quickly added the yeast, and then it was sealed with an airlock, so the carbon dioxide can escape, preventing an explosion, but no bacteria can get in.

And that was that – all 20 litres of it. As the bucket was moved to be stored, I felt a mixture of excitement and trepidation. Would it actually have worked as we'd hoped or be an utter taste disaster?

We shall find out in a few weeks when we return to bottle it. In the meantime...

This competition is now closed

But you can find out what our unique brew was named in the end, and what it tasted like, during our return to the beer lab.

For more information on the beer-making workshops, go to the London Brew Lab website

Poll: have you stopped going to the pub?

Five of the best English beers

Mussels with beer and coriander recipe