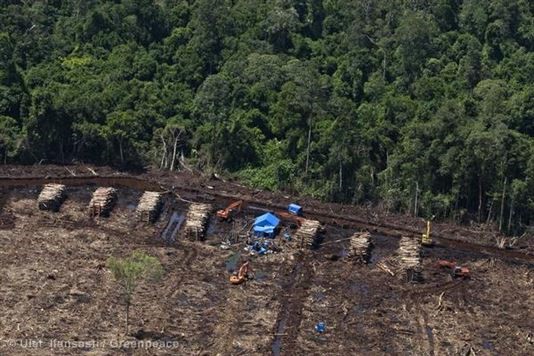 Greenpeace blamed “dirty palm oil” for the destruction of Indonesian forests this week. But is there such a thing as ‘clean’ palm oil? Or should we be boycotting it altogether?

Peanut butter is my favourite toast topping, and up until a few months ago I ate it nearly every day. But one morning I made the mistake of investigating its ingredients – nuts and salt are fine, but what about the palm oil? I knew it was a controversial product, and some further research online made me feel guilty for ever eating Skippy.

Palm oil, an edible vegetable oil extracted from the fruits of oil palm trees (tree and fruit pictured), is used widely in everything from baked goods to confectionery, cosmetics, and biofuels. From the moment you wake up, your palm oil consumption begins. It’s probably in your breakfast cereal, toothpaste, elevenses chocolate bar, and even the baked beans atop that lunchtime jacket potato. As such, many of us are unwittingly propping up an industry which activists say is devastating the environment, climate, and wildlife populations.

This week Greenpeace held palm oil-based products accountable for the destruction of Sumatran rainforests, much of which is razed (at a rate of a quarter of a million hectares per year) in order to create space for palm oil plantations. In its report ‘Licence to Kill’, Greenpeace said that Wilmar International (the world’s biggest palm oil processor, supplying products such as Oreos, Gillette shaving cream, and Clearasil face wash) was sourcing its oil from illegally cleared land. In the process, it was destroying the habitat of critically endangered Sumatran tigers, of which there are now less than 400 left.

And it’s not just big cats, as WWF's palm oil expert Adam Harrison explains: “Endangered species including rhinos, elephants, tigers and orangutans have lost their habitats, pushing them to the brink of extinction. Forest clearance has also forced some local people off their land, robbed them of their livelihoods and deprived them of essential services like clean water and healthy soil.”

Forests campaigner for Greenpeace Richard George also emphasised the severity of the situation: “Our researchers found that [the palm oil industry] was the number one cause of deforestation in Indonesia, responsible for a quarter of all forest lost in the last couple of years. In some areas, such as West Kalimantan, that figure is much higher, at about 75%. Palm oil companies often use highly destructive practices, such as digging drainage canals in peatland, which helped contribute towards terrible forest fires that raged across Sumatra this summer." Those fires released climate-warming greenhouse gases, and covered Sumatra in hazardous smog (pictured below).

Indonesian officials have suggested the fires were deliberately started in June, as a means to clear potential palm oil plantation space. It’s a charge that Wilmar has since denied, stating that the source of the blaze was outside its permit area. "We will terminate our business relationship with any suppliers found to be flouting the law against forest burning," it said. "We are currently reviewing our business strategy and practices... and have even invited Greenpeace to be part of the review process."

Unfortunately, the palm oil crisis so lamented by Greenpeace will get worse as our greed for the product increases. Compared with levels in 2010, demand is predicted to more than double by 2030, and triple by 2050. Indonesia already has six million hectares of oil palm plantations, but there are plans for an extra four million by 2015. Malaysia and Papua New Guinea are also home to growing palm oil industries.

So what is a peanut butter-lover like me to do? I scoured the supermarket shelves and found one jar, made by Whole Earth, which sported a ‘certified sustainable palm oil RSPO’ logo (pictured left) – sounds encouraging. The Roundtable on Sustainable Palm Oil (RSPO) was created in 2004 to ‘promote the production and use of sustainable palm oil for people, planet and prosperity’, and its members include high-street names such as Nestlé, Tesco and Cadbury. The vision is to make ‘sustainable’ palm oil the norm, by eradicating the worst practices associated with the industry – large-scale forest clearance, for example, and taking land from local people without their consent. Currently, 15% of the world’s palm oil is considered to be produced sustainably.

Whole Earth says it has to use a “specialist fraction” of (sustainable) palm oil to stop the other ingredients in its nut butters from separating, and to increase the product’s shelf life. A spokesperson from the company said that, as a company which uses palm oil, they find themselves in a tricky position: “The wide scale use of palm oil… has some negative impacts on the environment and biodiversity; but then again, the farming of palm oil is also an important source of income for local communities.

“We are therefore working hard to overcome this dilemma… and in 2012 we became RSPO certified. We commit to the organisation’s objectives and will actively contribute to the growth of sustainable palm oil through its sourcing practices.”

So that's alright then, isn't it?

"Besides, we keep catching RSPO members destroying the rainforests, including tiger and orangutan habitats, and many of this summer’s forest fires were raging on RSPO members’ land. The RSPO seems to prefer to downplay complaints from [organisations] like us, when it should be investigating them and kicking out any companies caught trashing the rainforest.”

In response to Richard's criticisms, RSPO Secretary General Darrel Webber replied: "The RSPO emphasises the importance of organisations upholding their commitment as a member and continues to be vigilant over this."

He added: "In a recent online debate on October 17, Greenpeace, WWF and the RSPO discussed the important topic of deforestation. All panellists – including Greenpeace – agreed that palm oil can be sustainable and that the RSPO standard is the basis to start from."

But the possibility remains that, even if we do play the part of responsible consumer and stick to RSPO products, we still might contribute to mass deforestation and the extinction of endangered animals. Is the absolute last resort to completely cut out products which use palm oil, even if they are RSPO accredited? Take a look at this Panorama article and the shopping trolley of palm oil products it lists. I reckon I could live without all of them if it meant saving the Sumatran tiger. What about you?

But yet again, I discover that this isn't the answer either. “We’re certainly not calling for a palm oil boycott,” said Richard. “Perversely, if we all stopped using palm oil, the rainforest would be under an even greater threat – it takes far more land to produce the same amount of coconut or soy oil. Besides, the responsibility for forest-friendly products doesn’t lie with the public. Companies must take responsibility for the palm oil they use and ensure they only buy from responsible suppliers that aren’t wiping out the forest to make a quick buck.”

What a frustrating position to be in – as an individual, I’m essentially powerless when it comes to helping the tigers, orangutans, and beautiful rainforest of Indonesia. I suppose it helps in some small way to buy RSPO products, especially from companies such as Nestlé, who have promised to only use palm oil that doesn’t threaten tigers or destroy the rainforest.

But essentially we have to put our faith in big companies like Cadbury and Tesco, who, I hope, will do as Greenpeace suggest and start monitoring their palm oil producers with a beadier eye. They could also support a moratorium on converting forest and peatland into palm oil plantations, which would give the breathing space needed to figure out longer-term solutions. Or they could back plans to restore deforested and degraded peatland, thus providing a relatively cheap way to reduce greenhouse gas emissions in places such as Indonesia.

There is one thing, however, that I, Charlotte Morgan, can do to help (other than make my own palm oil-free nut butter). “Use your power as a customer to demand that companies stop buying dirty palm oil,” advises Greenpeace's Richard George. “Ask them to stop making you an unwilling accessory to rainforest destruction.” Expect my letter in the post soon, Mr Skippy…

When attending a trade show this week (April 2014), I came across Meridian Foods and their nut butters. Meridian don't use palm oil in any of their range, which includes everything from crunchy peanut butter to hazelnut butter, pumpkin seed butter and tahini. Obivously their products are a wee bit soupy, and have to be stirred before use, but the taste is far more genuine than most nut butters on supermarket shelves. Everything is made in North Wales, and if you are indeed interested, you can peruse their range and order online here.

A life made out of plastic: how much do you waste?

Why England should be ashamed of its plastic obsession