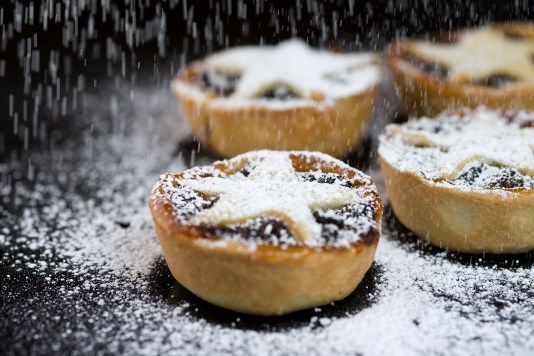 Crumbly, fruity, spicy or boozy: nothing heralds the arrival of Christmas more than a mince pie.

The ancestor of today’s sweet, dainty little mince pies in their foil trays was the medieval Christmas pie. These often contained meat - beef (if you could afford it) or suet, mutton, goose or even sheep’s tongues if you couldn’t. As well as being larger, these medieval mince pies would have been oval in shape to represent Christ’s manger, rather than round like the pies of today.

It was said that King Henry V was served mince pies as part of his coronation celebrations, which took place on the 9th April 1413. However, perhaps fittingly, the event was somewhat marred by a snow storm. During the Puritan era, Oliver Cromwell’s parliament made many attempts to ban Christmas, and all the food and festivities that went with it. On the  24th December 1652, parliament proclaimed ‘no observance shall be had of the five and twentieth day of December, commonly called Chyristmas [sic] day’. Mince pies were subsequently restored along with the monarchy.

Things had settled down by the 1800s and this recipe for mincemeat from 1788 by cook Richard Briggs lists suet, fat, currents, peel, apples, spices, brandy and sugar, which isn’t so far from what we eat today.However, you could still find recipes for mince pies containing meat right up to the Victorian era. This recipe for a ‘plain mince pie’ by Mrs. A. L. Webster, in ‘The improved housewife’ from 1844 declares ‘Neat’s [sheep’s] tongue and feet make the best mince pies.’ In 2009 chef Marcus Wareing recreated a recipe from 1624, and seemed rather impressed with the results. I wonder if something like this will appear on the menu at The Gilbert Scott this Christmas?

This year, as well as the ‘hidden’ clementine Christmas pudding, Heston Blumenthal has turned his eye to the mince pie. The mincemeat is augmented by rose water and lemon curd, the pastry is puff rather than shortcrust, and this being a Heston creation there has to be that little extra twist, which comes in the form of pine-scented sugar which you sprinkle over the freshly warmed pies. Oh, and on top of all this they’re square. To my mind they’re more a Coventry God Cake rather than a mince pie.

It is said you should eat a mince pie on every day of the 12 days of Christmas, and to refuse one is supposed to be unlucky, and along with a nip of brandy and a carrot, they’re left out as a thank you for Santa Claus. Other such superstitions abound, such as only stirring the mince mixture clockwise and not cutting a pie with a knife. A more fun tradition was the annual Big Eat mince pie eating competition held in Wookey Hole, Somerset. The record currently stands at 46 pies in 10 minutes, which is more than most of us eat in the whole month.

A pie for all seasons

For me the beauty of a mince pie is that its main ingredients start out in the hot, balmy days of summer. Firm-fleshed grapes go on to become succulent raisins and sultanas; the bright acidic citrus of lemon and orange mellow to become candied peel. To these are added autumn’s apples, along with the rich spice of nutmeg, ginger and cinnamon. A mince pie is the culmination of a year’s worth of produce, and is perhaps a just filling for this time of year, when we reminisce, catch up with friends and ring the changes.