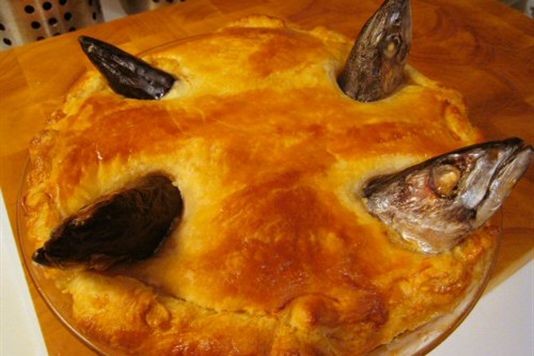 The small fishing village of Mousehole, Cornwall gives us one of our best food legends. Andrew Webb investigates.

The history of Stargazy Pie would make a great action movie. It is said to have been created in Mousehole, Cornwall (pronounced mow-zul) in honour of a brave fisherman called Tom Bawcock. Legend has it that Tom sailed out into a violent stormy sea to fish when the village was facing starvation. He returned with seven types of fish which were made into a pie and shared among the townsfolk, thus saving them from famine - hurrah! To this day his heroic deeds are celebrated every 23rd December in the town.

Gazing at the stars

The pie traditionally contained pilchards, with their heads poking out of the pastry crust. Dorothy Hartley mentions Stargazey Pies in her 1953 Food In England with a small drawing of each individual fish lovingly wrapped in pastry, like a fishy sausage roll with the heads protruding. She also describes a large family-sized pie version, and attributes the 'head poking out' effect to the Victorians, although hers are all arranged in a circular pattern with the heads lying at the edge of the pie like numbers on a clock face.

Other chefs have taken inspiration from the dish. Mark Hix's version featured rabbit and crayfish under the pastry cover, with four of the crustaceans poking through the crust, and it was the main course at the British Embassy in Paris on the BBC's Great British Menu programme in 2007.

Of course there’s scant evidence for the existence of Tom Bawcock, and it seems that the villagers couldn't have been that starving if they somehow found pastry, potatoes and eggs to make the pie. But facts be damned. It’s a great excuse for a party. So if you’re in the region on the 23rd, head to The Ship Inn, where every year they make a big Stargazy Pie. It contains seven types of fish in the pie filling, over which hard-boiled eggs are grated, then the pastry is topped with the obligatory pilchards peeking through.

Have you ever had Stargazy Pie? Are there any other food legends in your area which you'd like to share with us? Let us know in the comments box below.

Five fish it's safe to eat