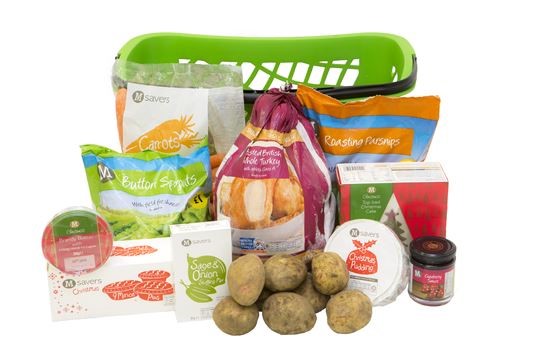 Stocking up for your Christmas dinner can be costly. Here's where to go for the cheapest shop this year.

Want your Christmas dinner to be as cheap as possible? Then head to Morrisons for all your shopping. A Christmas dinner for eight people costs £2.88 per person there, according to research I originally conducted for lovefood's sister site, lovemoney.com.

For the second year running Morrisons boasts the cheapest food basket of eleven different Christmas essentials, coming to a grand total of just £23.07.

This includes a turkey, Brussels sprouts and potatoes along with mince pies, two Christmas puddings and brandy butter.

The cost of Christmas dinner

When looking at cost alone the basket from Morrisons is a whopping £37.51 less than a similar basket from the most expensive shop on the list, Waitrose.

Aldi took second place last year but has slipped to sixth this year, behind Tesco and the Co-operative, with a total bill of £30.74, or £3.84 per person. This is because Aldi's cheapest offerings this year are mostly from its Specially Selected range. The potatoes, for example, are 'specially selected for goose fat roasting' while the parsnips are 'honey glazed' compared to the basic ranges that are the cheapest in other supermarkets.

The vegetables are roughly similar for most shops, but it is the larger items, such as the turkey or the Christmas cake, which make the most difference.

At Waitrose, for example, where the bill comes to £60.58 or £7.57 per head, the cost of the turkey is significantly more. This is because it’s priced by weight and it's free range. Ocado is the only other supermarket which has a fresh turkey included.

The shopping bills for each supermarket are not exactly identical as the weights and varieties are not always the same. If an exact product comparison wasn't available, I've used the closest match possible.

And here are the full results, cheapest first.

Those are the totals, but who was cheapest for each individual ingredient?

Where will you be doing your Christmas shop this year? Is it a case of whichever supermarket is closest, or do you take pains to get the best deal? Talk to us in the Comments box below.

The marvellous history of mince pies