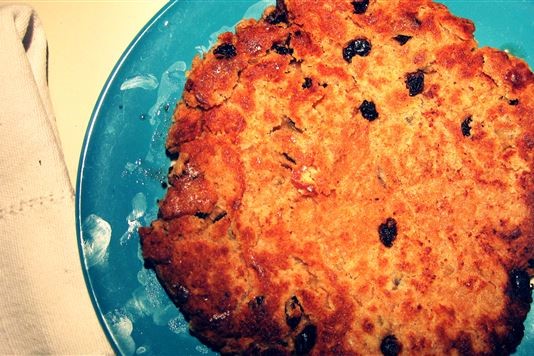 In the first of a new series on forgotten British breads, founder of Virtuous Bread and all-round baking expert Jane Mason explores the history of Singin’ hinnie. You'll find a link to Jane's Singin' hinnie recipe at the foot of this article.

Singin’ hinnie is a skillet or griddle bread from the north east of England, where “hinnie” was a term of endearment in the local dialect. The story goes that, whining for their tea, impatient children were told by their mothers, “It’s just singin’ hinnie!”, meaning “It’s nearly ready!”

In the days before ovens, food was prepared on top of the fire. Soups and stews were slowly simmered in pots suspended above the flames, water was boiled in great cauldrons, and all manner of things were fried on pans placed on tripods above the coals. In the case of Singin’ hinnie, when the dough hit the hot fat in the pan it began to 'sing'... when it went quiet, you knew it was time to turn it over or take it out.

Singin’ hinnies, like scones, have an infinite number of recipes. Basically, they would have been made from whatever the lady of the house had on hand – but certainly nothing so luxurious as eggs, spices, or even sugar! A little handful of currants, if you were lucky enough to have them, went into the dough, and sour milk would have been the liquid of choice – it acts as an agent to help the bread rise in combination with the bicarbonate of soda, and it was a good way to use up turned milk. In the days before pasteurisation and refrigeration, this would have been a very real concern.

A bit about fat

For a quick, delicious, simple and nutritious bread to accompany a meal, or just snack to eat with butter and jam or cheese, try Jane's Singin’ hinnie recipe here. And keep an ear out for the singing!

All our baking recipes

The history of the clootie dumpling

The history of maslin, the original rustic bread