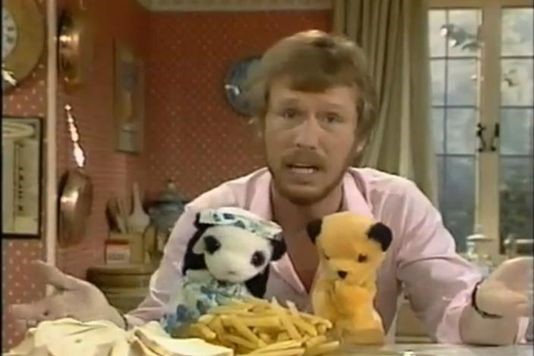 Faddy diets, cutting down on butter, drinking `diet' everything... bleurgh. For me, there has only ever been one key to keeping healthy: eat in moderation. And I learnt that from a yellow bear.

I'm an 80s baby, educated by Sooty the bear, Sweep the dog, and Soo the panda. Three furry friends, who I still can’t help but love; even today, I’ll happily watch the Sooty Show with my younger sister.

Scoff you may, but alongside Matthew Corbett’s genius puppetry work, the best thing about Sooty was how much he taught me... to mind my Ps and Qs, to be considerate of others, and, most important for my life now, to eat in moderation. I can remember sitting on the floor with a banana sandwich watching the ‘Health Food’ episode of The Sooty Show. I recall singing the song, and realising that eating too many sweeties would give me holes in my teeth. Quite a coup, for a six-year-old.

During the 20 minute show, Soo goes on a health food craze. She won’t let Sooty and Sweep eat their pocket money sweets; she confiscates takeaway pizzas; and chucks all the red meat away, replacing everything in the fridge with bran! Watch the drama unfold below...

What follows is a scrappy tiff and terrible bran flapjacks, all leading to the wonderful conclusion that both the boys and Soo are wrong: they can eat both good and bad foods! Everything in moderation, as the song goes…

Here’s the first verse of what Soo and Matthew sing together (spin forward to 16:50 in the video above to hear the song).

It used to be said that you are what you eat,
You could be sourer than lemons, or sweeter than sweet,
That’s what they used to say!
But now all they say is you mustn’t eat that,
Stop taking sugar, avoid getting fat,
That’s what they say now!
Here’s my advice which I give on the quiet,
Try and manage a balanced diet,
It’s a situation called…
…eat in moderation!

Genius. I wonder what Dr Atkins would have to say to that? Surely there’s no need for low fat this and no added sugar that, when the alternative is so simple that even a mute yellow bear can get it? Make Sooty and friends part of the national curriculum, and I reckon childhood obesity would drop.

So what telly are the kids of today brought up on? The BBC’s I Can Cook is far healthier than Sooty… instead of welcoming both burgers and bran, presenter Katy Ashworth focuses wholly on ‘good’ food, and how to disguise vegetables; think carrot and courgette muffins, or seafood ‘bites’. Songs are still in fashion, too – the one about washing your hands before cooking is pretty catchy.

Adverts have been targeted too. Over in America, where 30% of the population is now considered obese, Disney announced in 2012 that it was banning junk food ads aimed at kids on its television networks. Starting in 2015, food makers will have to comply with Disney’s new nutrition policy, limiting calories, sugar, and salt content. Michelle Obama has publically congratulated the plan, although given that Disney makes over £650 million a year from junk food adverts directed at children under 12 years, there’s a chance that they may lose a lot of money.

Do you think much has changed in way of kids cooking on TV over the past 20 years? And if you’re a parent, how do you get your kids eating healthily? Talk to us in the comments box below…

A dangerous reason to fear your TV

Who's the most influential TV cook?

Getting kids into curry