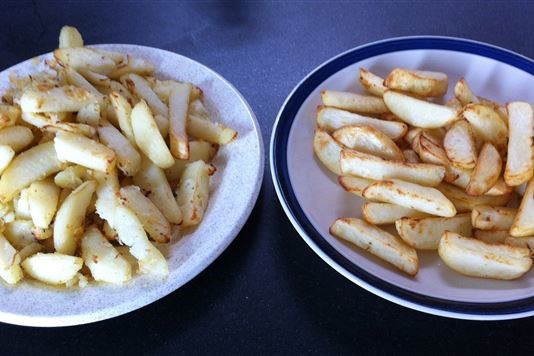 Interested in a low-fat fryer, but don’t know which one to buy? We pit two of the most popular models against each other in a kitchen showdown.

March of the low-fat fryers

There’s no such thing as a healthy chip – at least, not a decent healthy chip. I speak from experience, what with chips being my absolute favourite food in the world (encouraged by childhood holidays on bracing British beaches). But then again, I’ve never tried cooking chips in a low-fat fryer… perhaps they would taste just as good as those I ate every year on Sheringham pier?

Sales of low-fat fryers are booming at the moment, and none more so than the stylish Tefal ActiFry Mini. It scores 4.5/5 from 200+ Amazon reviews, and when one arrived at lovefood HQ for me to test, the whole office swarmed around it ooohing and aaahing with jealousy. But, of course, it’s not the only low-fat fryer on the market: Philips, Breville, Vivo, Salter and Duronic all offer similar models, each one costing between £100 and £200.

The second biggest seller seems to be the Breville Halo Health Fryer (top picture), and the folk at Breville assured me their model is just as excellent as Tefal’s. In essence, the two machines do exactly the same job (fry food using very little oil) and work the same way too. Both require only one tablespoon of oil for cooking (99.5% less than a three-litre standard fryer), work using a rotating bowl to ensure even browning and crispy results, require no par-boiling, don’t need to be pre-heated, and have removable, dishwasher-safe parts.

They even sport the same lime green and white colour scheme, although the ActiFry is perhaps a little sleeker in design. The version we tested, the recently-released ActiFry Mini (bottom picture), is amazingly light.

We put them to the test by cooking a batch of chips in both, although you can actually fry, cook, bake, sauté and roast everything from fish to vegetables and meat in these machines, both of which come with a recipe book.

I peeled over a kilo of Maris Piper potatoes for the test, chipping them into fat wedges and then chucking a pile into each machine (the ActiFry took 500g of chips; the Breville 800g). They were both simple to use – just add a tablespoon-or-so of oil (I used sunflower) using the special spoon provided, set the time to cook (22 minutes for the ActiFry; 35 minutes for the Breville), and watch the magic unfold.

The Breville model was virtually soundless, and for the majority of the cooking time it was lit up so you could see the chips browning inside. The Tefal, on the other hand, sounded like a vacuum cleaner (see the video below for our 'sound test'), and a lack of internal light made it hard to monitor what was going on. Not that it mattered too much – after the allotted cooking time, both batches of chips looked pretty darn good, albeit in different ways. The Breville chips were a touch paler, crispier and, in places, broken up. The Tefal chips were far more ‘whole’ and browner around the edges.

It’s incredibly easy to transfer the chips to your plate – the Tefal model has an integrated handle, while the Breville includes an attachment for the same purpose. Just a touch of sea salt later, and the chips were ready to eat. I got eight willing volunteers to taste both batches, indicating which plate of chips they preferred. Comments included: “they’re all perfectly cooked”; “the Tefal chips (top picture) look better, but for me Breville taste the best”; “the Tefal chips taste too healthy for me”; “the Breville machine makes chips which taste a little bit naughty, which is the whole point of chips”.

And the winner is...

In the end, the Breville chips (bottom picture) won by a slim majority – five to three. But I found both batches incredibly impressive, given that they were made with just a dash of oil; the same amount of oil that I’d probably dress a salad for two with. And you don’t even have to use sunflower oil, either – the machines work just as well with healthier options such as rapeseed. Plus there’s very little washing up to do, and all of the removable parts are happy to go in the dishwasher.

The choice is yours

If I had to choose between the ActiFry Mini and the Breville Halo Health Fryer, I’d probably plump for the latter – it’s cheaper, has a bigger capacity, and is almost silent, especially when compared to the ActiFry. But if aesthetics are a big concern, then maybe go for the ActiFry – it’s beautifully designed, and petite in size. Either way, if you like your food fried, then a low-fat fryer is, in my opinion, well worth investing in. You won’t get chip shop-standard chips, but you will get a very good impersonation, without the calories.

You can buy the ActiFry Mini for £187.21 from Amazon (or get the larger, original ActiFry for £170 from Debenhams); and the best deal for the Breville Halo Health Fryer is a bargain £74.50 from Debenhams.

Have you got a low fat fryer? Which brand? Is it any good? Talk to us in the Comments box below.