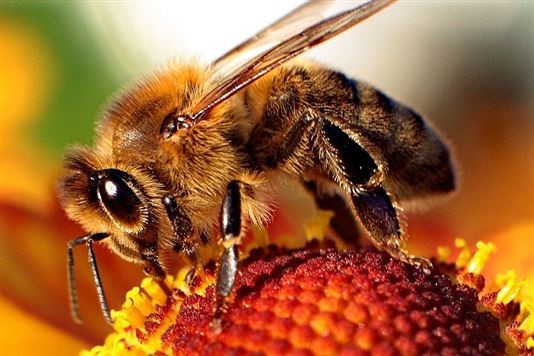 By pollinating our crops, bees have kept us from starvation. Is it right that we're still hungry enough to eat their honey too?

My research into the world of hives and honey began with the discovery that vegans don’t eat honey. As Ben Hewitt of The Vegan Society explained to me, the “fundamental reason” behind this is the ethical vegan principle that no animal is there for humans to use. And because honey is produced by an animal, vegans will not eat it.

Ben outlined several issues with beekeeping. Honey, he says, is “produced under very controlled, abusive conditions, where Queen Bees that would live years and years are mass produced and killed off very regularly.” Citing also the possibility of the rapid spread of disease within colonies, as with other intensively farmed animals, and the practice of replacing extracted honey with "less healthy" sugar water and corn syrup, Ben’s case took on a new slant. "By using bees for honey, humans are treating an animal as a commodity, rather than as a being that has a right to everything it produces. We do not have the right to the fruits of their labour.”

Our lack of entitlement to the produce of another creature's hard labour also strikes a chord with food blogger Kerstin Rodgers (who you may know as MsMarmitelover). Kerstin is currently writing a book on veganism and has gone vegan while working on it. She confesses that she’s becoming more convinced by veganism as she learns more about the subject.

However, she would still eat honey (at the moment): “It’s really hard to feel emotional about an insect, because they’re not mammals, but we should. They’re still creatures and they are being exploited.” Insects might be “small and often unattractive… [but honey farming] is basically enslaving the bees, forcing them to work – for free, for no return whatsoever.”

She asks me if I’m vegan – no. I’m not even a vegetarian, but researching this feature has given me a lot to think about. For me, it’s somehow harder to imagine honey being from bees in the same way as knowing that eggs come from a chicken, and milk comes from a cow. Or to remember the hard work bees have to do to actually create the stuff. Kerstin also mentioned silk being non-vegan, as it's produced by silkworms and cochineal (a food colouring) which is made out of crushed beetles. Which makes sense, but I’d never seen it from this point of view before – when you only see it on a shop shelf, it’s easy to overlook the methods of production.

Where would the bees be without us?

Not that this is the only perspective, of course. Gill Maclean of the British Beekeepers Association (BBKA) was keen to point out the difference between commercial farming and amateur beekeepers, who actually play what she calls a “vital service” by stepping in to feed bees where they would otherwise starve.

“Not this summer, but the year before,” she says, “it started raining in April and didn’t really stop all summer. So we had a situation where colonies of bees were starving, and if it hadn't been for beekeepers stepping in and actually providing them with sugar syrup, the colonies would have died out.”

Furthermore, Gill says, wild colonies of bees have greatly dwindled in numbers, and the fact that there are honey bees at all "is due to the care and attention of beekeepers.” And where would we be without bees? We rely on them to pollinate plants, which is a natural process, but as their numbers fall in the wild, do humans have a moral responsibility help honey bees survive? Should we have a symbiotic relationship, rather than a dominating one?

In fact, steps towards that equilibrium are already being taken, according to Kerstin. There’s a new movement in beekeeping that is “based on politely taking a small amount of [spare] honey… as opposed to grabbing all of it and feeding [the bees] sugar.” Which sounds a lot fairer. Some people, says Gill, only keep bees for the “beneficial impact on the environment”, and though they might take an amount of honey from those hives, it would only be a small amount – and they definitely wouldn’t turn a profit from their work.

In fact, General Secretary for the Bee Farmers Association (BFA) Margaret Ginman says that most of those who do turn a profit don’t take more honey than is “surplus to requirements”. Furthermore, unlike vegan Ben, she claims that substitute feeds are “just as nutritious as honey.”

Would vegans accept beekeeping as a mutually beneficial practice undertaken by amateurs, rather than what they usually see as an exploitative commercial endeavour? It’s still a no. Ben argues that there is “always a nutritionally equivalent alternative to any animal-derived product; arguments about how we obtain that product are assuming that there is a need for those products.” He was also keen to point out that there are alternative solutions to honey such as agave syrup and nectar, which are free from all animal products.

What about commercial farmers?

While there might be alternatives to honey, how would the bees fare without big colonies managed by humans? Margaret Ginman backed up the claims made by the BBKA, stating that, without beekeepers, the population of bees in Britain would be zero, as hives are under constant threat from infestation by parasitic mites.

“Beekeepers are keeping honeybees alive [by protecting them from] varroa predation," says Margaret. "A hundred years ago there were many millions of honeybee colonies, both managed and feral, and the wild pollinator population also flourished despite the honeybee numbers. Now there are less than 200,000 hives in the UK. If these numbers fall any lower we could have problems meeting pollination targets for sustainable food production to feed our growing population.”

Beekeepers help keep the levels of pollination high by moving their bees at key times of the year to boost pollinator populations in “monoculture situations – orchards, borage, and crops” says Margaret. They will move bees in “at the start of the glut and out when it is over, thus protecting the native pollinators.” So not only do they protect the bees from parasitic predators, they move them to areas in which the bees can thrive and at the same time help farmers keep their crop production high. Isn’t this already fairly close to the system of give-and-take outlined above?

So should I eat honey?

There’s no easy answer to whether or not honey consumption is ethical. Having said that, I don’t intend on presenting these counter-arguments to vegans in an attempt to convince them that honey farming is utterly necessary. But there’s never been any doubt that bees play a key role in our ecosystem. If they were to die out due to a lack of human intervention, we’d have some very big problems to deal with.

What do you think? Is honey production ethical? Vote in our poll and share your thoughts in the Comments below.

Beekeeping in the city