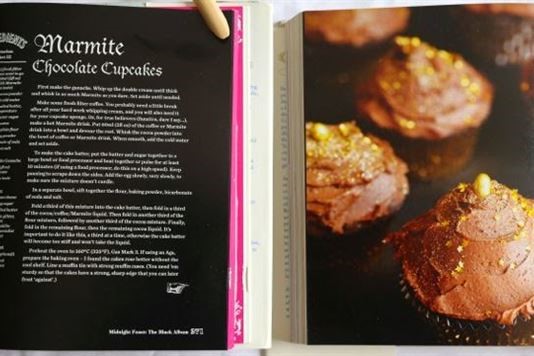 A food blogger has accused a London bakery of 'stealing' her recipe for Marmite cupcakes. Does she have a case? And should we have clearer rules for recipe copyright?

An award-winning food blogger claims her recipe for Marmite cupcakes has been stolen by a London bakery chain.

Kerstin Rodgers (pictured left), better known by her blogger pseudonym Ms Marmite Lover, was commissioned by Marmite in 2010 to create recipes for two types of Marmite cupcake. Both called for a Marmite-laced centre and were consequently published in Kerstin’s 2011 book Supper Club (main image, above). But now, four years later, a near-identical cupcake is being sold by Lola’s, who claimed earlier this month that they were the first to make Marmite cupcakes.

Kerstin read about Lola’s claims and took to her blog to refute them. Their recipe, she says in her latest blog post, “seemed remarkably similar to mine”.

You can see exactly what words Lola’s have ‘copied’ from Kerstin’s original method on this blog post (they’re highlighted in red). But briefly, large chunks – such as step 2, ‘Brush down the sides of a pan with a brush dipped in water to prevent crystallisation’ – are the same, word for word. The ingredients required, however, do differ slightly.

Kerstin says that she ran her original Marmite cupcake recipe text through a plagiarism checking site, which brought up at least four different links to articles about Lola’s and their ‘first ever’ Marmite cupcake.

To add another twist to the tale, the recipe used by Lola’s (which can be viewed here in Shortlist magazine) “makes no sense” according to Kerstin and many Shortlist readers. Comments at the foot of the Lola’s recipe include, “I noticed that the ingredients for the insert are missing,” and “the bit about caramel condensed milk is very confusing!” The recipe also calls for 100g of Marmite: “way, way too much, even for someone who loves Marmite,” says Kerstin, speaking exclusively to lovefood.

“It’s clear that whoever cobbled that recipe together has never baked in their life,” Kerstin told us.

"A shock, or a pleasure"

Kerstin, who has confronted Lola’s and is yet to receive proper explanation from them, says: “When I first created that recipe, I wasn’t paid very much. No-one paid me for the copyright, and so the recipe automatically remains mine.

“I don’t expect Marmite, or anyone else, to use it to promote another company. It’s totally unorthodox."

Campaigning for the little people

“Bloggers like me," says Kerstin, "who don’t get paid remember, are having their content ripped off all the time, and I think this story about my Marmite cupcakes has hit a nerve. So I’m campaigning for the little people, and will continue to do so until I get answers.”

Kerstin, who won the Guild of Food Writers 2013 Best Blog of the Year award, has asked Lola’s and Marmite to provide her with some “hard facts” about how such a ‘mistake’ occurred, and is expecting a phone call from Marmite this week.

What Kerstin wants, she told us, is a public apology acknowledging the error, for Lola’s to credit the recipe to her, and to be paid for her original recipe.

As for Lola’s and Marmite, a joint statement denied that their cupcakes were the same as Kerstin’s. It said that the “only similarity” between the two recipes is “the use of a liquid centre that is found in over a third of Lola’s range.”

Can you copyright a recipe?

Does Kerstin, who is planning to consult a lawyer over the debacle, have a case? Most recipes are not original (think of all the Victoria sponge recipes you’ve seen that call for the exact same ingredients), and as Kerstin herself admits, “Recipes are like Chinese whispers – every time someone cooks them, they turn out slightly differently.”

Of course, you can’t copyright a recipe for something inherently universal (like a Victoria sponge), but the rules get a bit hazy when it comes to ‘original’ recipes. As Kerstin explains in her blog post, “I would argue that Marmite cupcakes is not a classic recipe – it's an original idea, even a gimmick.”

When such a recipe exists, and it is used by someone else in another context, it is usual for that second person to at least credit the original creator, to allude to the fact that it was ‘inspired by’ them, or words to that effect.

Legally, ingredients cannot be copyrighted, and nor can a recipe method. “It’s just not terribly ethical,” says Kerstin.

Are you backing Kerstin? Should the ‘little people’ have more rights? Or is Kerstin fighting too hard a battle? Vote in our poll and share your thoughts in the Comments box below.

All images courtesy of msmarmitelover.com. Kerstin's new book, Secret Tea Party, will be published in November 2014.