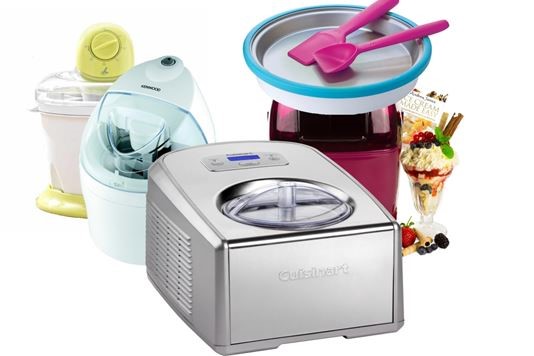 Five ice cream machines, one kitchen. Which machine will triumph in the battle for the best ice cream?

Previously, lovefood has tested coffee machines, experimented with low-fat fryers, and had a great time with graters (sorry). But our latest test, involving five ice cream machines, definitely aroused the most interest from the office gannets.

After all, are there any words in the English language that guarantees someone’s attention more than ‘ice cream’?

We made five batches of ice cream, all from different machines, using the recipe for 'vanilla ice cream' recommended in their respective instruction manuals. Taste testers were asked to give each ice cream a rating out of 10 for texture, and add any other comments about what they liked or disliked.

We also had an interesting device from Chef’N called the ‘Sweet Spot’ Ice Cream Maker – here’s a video of it in action:

Starting with the poorest performer and working our way upwards, here are the results from our ice cream machine kitchen test. Using the machine: This machine was one of the quietest, which was nice – but you do have to freeze the main body of the machine for at least 24 hours, which can be a pain if your freezer isn’t very big.

Nice and colourful though, and there’s a handy chute on the lid to feed the ice cream in through, so that you don’t have to take the lid off.

Taste test: People didn’t like this one very much, commenting that the texture was ‘grainy’, and the ice cream was both ‘watery’ and not very smooth. One person even gave it zero out of ten for quality, though it did have a couple of fans among the critics, who said they thought the consistency was good. Using the machine: It’s pretty boring looking, and a bit noisier than the rest that we tried out. However, it’s extremely simple to use.

Again, the bowl must be kept in the freezer for 24 hours before use, which isn’t always convenient.

Taste test: Some people felt that the ice cream produced by this machine was average, which isn’t a bad thing, but there wasn’t really anything special here. It wasn’t creamy enough, and a couple of people said that the ‘icy’ texture was off-putting. Using the machine: Intriguing little device, this. It’s a metal plate that you put in the freezer, and when it’s freezing cold (another 24 hour wait), you make ice cream directly on top of it with the paddle and scoop provided. Good fun, if a bit time consuming.

The ice cream it makes isn’t really all that solid though, and might benefit from another half hour in the freezer after you make it – though it’s by far the most compact of all the makers we tested.

Taste test: People were particularly happy with the smoothness of the ice cream, and one person said it was similar in texture to a Mr Whippy. But it did melt really quickly, as it was freshly prepared – the plate simply doesn’t freeze the ice cream to the point of solidity. Two people described it as ‘very gloopy’. Using the machine: A handy stand and flashes of lime green make this a little more attractive than the average machine, and it was also among the quietest. Once again, you have to freeze the body before use for 24 hours.

Kids will probably love this one for its egg-timer style switch, which is more novel than an on/off switch. It’s a bit bulky, though it does come apart for easier storage.

Taste test: One taster said that it had the ‘perfect texture’ but a few commented on the graininess, while others described it as middle-of-the-road. However, lots of people said it was great. This one divided opinions, but it still received a fairly high score. Using the machine: It’s big. You might struggle to find storage space for this one if you have a small kitchen, plus it’s heavy and requires very careful handling. It’s also a bit loud.

But for all its negatives, this one has a huge positive to explain that level of noise and size: it has an inbuilt fridge unit that blasts the ice cream cold as it churns. So you don’t have to wait ages for the bowl to be ready for use, and it feels really professional.

It comes with two paddles, one for ice cream and one for gelato, which are far sturdier than any of the other machines’ paddles, and it's super easy to use. Fairly easy to clean too, and it comes with a five year guarantee from the manufacturer. But it also comes with a hefty RRP.

Taste test: The only machine to receive 10/10 scores from some participants of our test. The Cuisinart ice cream got very positive feedback on its creamy, smooth ice cream, which was ‘delicious’ and the ‘best of the lot’ – the comment to sum it up best is, ‘yummm!’

If I had to pick

Personally, if I had to choose one of these machines, I’d go for the Cuisinart. It’s large, but it’s robust and makes exceptionally good ice cream (and gelato). It feels like a pro piece of kit that would last far longer than any of the other machines.

The price is a barrier, but with a fifth off at Amazon right now, it’s a bit more reasonable.

Do you have an ice cream machine at home? Is it any good? Talk to us in the comments box below.