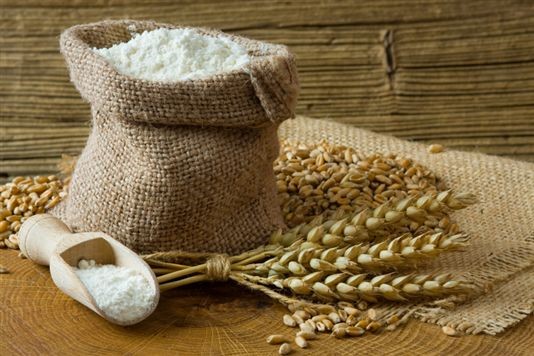 All baking starts with flour, but which type should you choose? Here's our guide to the popular varieties.

Wheat is made of three different components: the bran, the wheatgerm, and the endosperm. The first two of these are removed for white flour, and the milled endosperm is often whitened using bleaching agents. Plain flour has hundreds of uses in the kitchen, both savoury and sweet. It can also can be used to thicken sauces and dust meat prior to sealing. Pastry made with plain flour will not rise, and because of the low gluten count, it will be flakey or short. Consequently, it’s perfect for pies.

Self-raising flour is just plain flour with baking powder added to it. Baking powder is a raising agent consisting of two natural chemicals that react with wet ingredients to give off carbon dioxide. This then gets trapped in the dough, forming bubbles which allow the mixture to rise. Consequently you should always work quickly once any water or other liquid is added to self-raising flour so as to trap the gas.

Self raising is best used for cakes and sponges and other lighter airy bakes, like our classic Victoria sandwich recipe.

Strong, or bread, flour is made from hard wheat varieties. It has a high gluten content, around 12% to 14%. When this is kneaded it forms together into structures, meaning the resulting dough can hold its shape better. Consequently this flour is best used for bread. It has other baking uses, and is found in hot water crust pastry.

Best for making pasta or pizza, the zeros refer to how fine the pasta is milled. 0 is coarser and 000 is finely ground, like cornstarch. Use this flour to make your own pasta, then make a tasty Italian dish like fettucine con verdure. Most Italian flour is produced in the south of Italy.

Things get confusing here, as there’s wholewheat, wholemeal, and brown flour. Wholemeal is the term used in the UK, and means everything that was milled is added, unlike white flour which has the germ and bran removed. You can use wholemeal instead of plain in most recipes, though you might have to adjust the liquid content up a bit. Wholemeal also has more texture than white flour, perfect if you want a denser bake, like in Edd Kimber's Nanna's Gingerbread recipe.

Rye flour produces a dark, strong-tasting loaf with a chewy texture. Sometimes it’s mixed with strong bread flour to give a little lift to the loaf. Rye breads are popular in Northern Europe. It’s not really a flour for baking and has only a few other uses outside bread making. In Finland they use it to dust the skin of salmon fillets to give a crunchy texture.

All our baking articles and recipes

The secret of how to make rye bread

The experts' guide to bread making