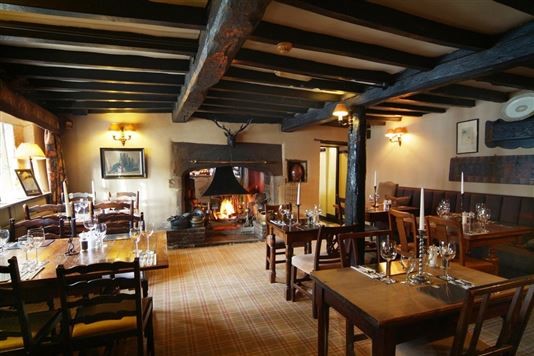 The inn: an age-old British institution, where you can sup fine ales, have something to eat and stumble up to bed afterwards. Jane Verity finds out why they're thriving again.

It’s no secret that the ‘inn’ is in the midst of a revival. From Heston’s Fat Duck to Tom Kerridge’s Hand and Flowers, the humble inn is now a likely place to find AA Rosettes and the odd Michelin star. But what is an inn and why are they enjoying a resurgence?

What should an inn do?

The inn is traditionally defined as ‘a house providing accommodation, food and drink, especially for travellers’. But when did they start to become popular?

I caught up with some of the members from the ‘Great Inns of Britain’ (a collection of like-minded independent country inns founded in 1986 by Sir Thomas Ingleby, owner of Ripley Castle and The Boar’s Head Inn, North Yorkshire) to find out what the fuss is all about.

Simon Heaton, Chairman of The Great Inns of Britain and owner of Shibden Mill Inn in Halifax (pictured left), says: “There is something really alluring about the history of an inn – Shibden Mill has been at the heart of local life here for over 300 years.

“Inns are generally small, independently-run businesses, whose successes rely heavily on the skills and the charms of the people who run them. They live and breathe stories, their menus are the products of a few individuals’ hard work, they use local ingredients, and they pay attention to detail.

“In all of those aspects, inns tend to be the polar opposite of large global restaurant and hotel brands, and I think there’s been a bit of a rebellion against that in recent years."

When Simon and the board look at applications from inns wanting to become members of Great Inns, they look at a certain set of criteria: first and foremost a commitment to quality, but also a genuine, friendly atmosphere and the art of being stylish without ever being stuffy or exclusive.

Member Charles Bowman, owner of the Inn at Whitewell in Lancashire (garden pictured left), tells me that an inn is somewhere where “you can turn up with a dog on a string.” His Great Inn (and if you haven’t been, it’s fantastic) has been in the family since 1976, and Charles has run it since he quit a career in advertising 14 years ago.

The bedrooms are beautifully eccentric here (beds so high as to evoke fairytale fantasies), and Charles is full of stories of the place – the time when the whole kitchen descended into the river being a particularly good one. But for all of his cheerful insouciance, this inn is incredibly well run and managed. It has become the stuff of legend.

All about the food (and romance)

Charles says that beyond their informal, friendly atmosphere, the secret to success is all about the food. They have worked hard over recent years to make their food the freshest it has ever been, and they now make everything themselves, apart from the butter. Their homemade marmalade is a bit of a treat. As is the mayonnaise.

Similarly, John Vereker, owner of The Bell Inn, Horndon-on-the-Hill, Essex (pictured left) says that from the day he and his wife Christine took over the reins of the family business in 1970, they knew that it had to be all about the food.

The inn has a romantic back story actually. John first came across it when he was in the merchant navy (they used to stop over in nearby Tilbury), and he once asked if there was a decent pub in the area. He was sent to the Bell Inn, met a nice girl behind the bar, and after nearly 10 years away at sea, he came back and married her. Some 44 years later, John and Christine are still running The Bell together.

From his experiences on the other side of the bar, John knew that they were too far out of town to ever be a great success just as a boozer – so they tried serving food. They converted what had been a living room into a restaurant and Christine cooked while he “flounced around” front of house, proudly wiping things off the blackboard when they’d run out.

“No-one cooked food in pubs before the seventies,” says John. “It was unheard of. In the early seventies there were the Bernie Brothers – Italians from Bristol who had the idea of leasing failing pubs from brewers and cooking in them – but we were doing it even before them. People used to come up to me and say ‘Good god, you’ve got a blackboard’, like it was the most eccentric thing in the world! And I suppose it was at the time.”

John and Christine started out doing four starters, six mains and four puddings – and it took a while to get going. To begin with people were unsure about anything that wasn’t meat, veg and potatoes. But by the early 90s, the term ‘gastropub’ had been coined, and suddenly tables were full.

The Bell now has nine full-time chefs, a staff of 50 and does 950 covers a week – and 60% of their business is ‘dry’ (ie food, not drink), as opposed to 25% when they started out. Although John points out that the ‘pub’ side of the operation still remains crucial, with the two bars generating a buzzy, relaxed atmosphere that diners seem to find so alluring.

They have also recently bought and renovated High House, a Grade II listed building next door to the inn, to create ten new bedrooms (pictured left).

But John still feels it's tough times for the industry. There are currently 26 British pubs closing every week, he tells me. A few years ago it was 100 a week. He points out that it is much, much harder to cook good food than it is to pull a pint.

The best place for a sleep

While that might be true, it doesn’t seem to have stopped the hotel industry embracing the inn. The Wild Boar Inn in Windermere (pictured below) is owned by English Lakes, which owns five hotels including Low Wood Bay just down the road. It is run by Andy Lemm, who lives on site with his family.

“Within a couple of years [of coming here], we decided to do something with the Wild Boar to make it fit in with the rest of our four-star properties,” says Andy. “The original building is a 17th-century coaching inn, so it absolutely made sense to restore it to those roots.

“We moved the bar to just inside the entrance (where else do you expect the bar to be at an inn?) and we looked at strengthening our food even further. We now have our own smoke house, micro-brewery and allotment onsite.”

Head Chef Marc Sanders has been at The Wild Boar for 22 years, and has seen it in all its guises. When he started here, there was an a la carte menu on a Saturday that had about 500 pages in it!

How to be a good innkeeper

Similarly, Thomas and Cheryl Robinson, who own the Rose & Crown in County Durham (pictured below), also run the nearby Headlam Hall Hotel.

Thomas feels it’s increasingly important to keep up to date, and to keep investing. Whilst he's the one who’s always planning and looking ahead to the next project, Thomas is insistent that Cheryl is the innkeeper, not him.

“Cheryl wants (and can) do everything! To me that’s what being a great innkeeper all is about. Not content with dealing with guests, organising suppliers, serving behind the bar and managing the restaurant, she’s now learning to work alongside the chefs in the kitchen! She’s much more talented than me, and that’s why Cheryl’s the innkeeper of the family.

Find out more about the Great Inns of Britain

Do you have a favourite inn? Share your recommendations in the Comments box below.

Poll: have you stopped going to the pub?

Eat and Drink: the best of Bakewell and surroundings

Eat and Drink: the best of Wensleydale, North Yorkshire